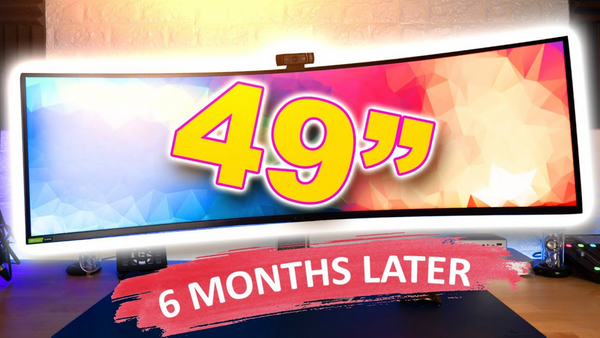 Six months ago I reviewed the Samsung 49" Ultrawide screen. Since then people have been asking me would I still recommend it?

Six months ago I reviewed the Samsung 49" Ultrawide screen. I had a few minor issues, but all in all, I said it was an incredible screen.

Since then people have been asking me in the comments of that video - now that I've been using it for 6 months - would I still recommend it?

Hi, my name is Pete, and on this website, we help busy entrepreneurs find the best tech, be productive and stay safe online.

This Samsung 49" Ultrawide IS the best ultrawide screen that I've used, still to this date. That's including other 49" options like the Dell screen which I switched from when I got the G9.

BUT, I have had issues in my time of ownership - so let's talk about those issues so you know what to look out for if you are interested in buying a G9 for yourself.

By far the biggest issue that keeps coming up time and time again is a weird situation where if you have windows in a certain position on your screen, the colours change, and the whole screen fills with these odd stripes. You can only solve this by moving the windows around until it stops, but you can literally move windows in one place and it works, then move to another and it doesn't. It is such a weird bug!

However just before I made this post, I decided to check to see if a newer firmware had been released for the screen, and it turns out that version 1012.1 was released on the 14th of July, just a few weeks before I wrote this.

I installed the update, and now I can't get the screen to do those weird lines anymore. But the good news is that the issue is fixed! Well, kind of. Because what does still happen is when you move around large, dark windows on the screen, you get a weird flicker, which I think is coming from the dimming zones.

It's not a huge problem, but it's still noticeable so thought I'd mention it. Also, I wish Samsung would tell you what they actually fix in each firmware - literally, there's no information other than 'here's a new update!'

Other issues for me - 240Hz. On the Mac side of things, 240Hz is useless as Mac won't run above 120Hz, but on the Windows side, 240Hz does look buttery smooth when on the desktop, and when using it for productivity it's beautiful. I just don't own or really play any games on the screen that will reach anywhere near 240hz. Particularly as now I have the new Gaming TV that runs the PS5 and Series X at 120Hz.

For those of you asking about my Caldigit Dock and the new M1 Range of Macs, I have no issue at all getting my M1 Mac Mini or M1 Macbook Air to run at 120Hz via the Caldigit. You do need to set the screen itself to 120Hz, and I am using a specific cable that I bought on Amazon. When using the cable and the Caldigit dock, there are literally no issues and it works every time. Though, my advice for you is if you are still having issues and are using both of those things already, then download a utility called ScreenResX which you can use to force the screen to the right 5120 x 1440 resolution.

Oh and for a few asking in my last video, yes the G9 does support Picture by Picture. It works really well, and it doesn't screw up the resolution on either Mac or Windows as it just gives you a resolution that has all the right proportions for either side. I often have Windows and Mac side by side, though I might try going Windows only again soon as I do like the buttery 240Hz refresh rate on the desktop. I only wish I had the newest MX Master 3 mouse because I'm too cheap to upgrade from my first-generation one. Right now I have to press for input 1 2 or 3 to switch between devices, whereas the MX Master 3 includes a feature called Flow which looks to seamlessly move your mouse and keyboard between machines. Maybe consider subscribing to the channel so Logitech might actually think I'm good enough and send me one to test that feature out? :)

One other minor issue for me has been the size of the stand. Because I'm using an Ikea kitchen worktop, which isn't as deep as most proper desks, it means that my stand is actually off the edge of the back of the desk, and even then comes out quite far onto the desk. Yet to find a reasonably priced solid floating arm that will hold this weight has proven difficult. Ideally, I'd probably want a deeper desk so that wouldn't be an issue anymore, and for most people using this in an office that won't be a problem. But if you are working at home where space might be an issue, it's definitely something to be aware of.

Other constant issues that I've heard about, mostly in the comments section of the last video, but not experienced myself are things like cracking, which is where the Glue cracks as the screen heats up and cools down, and light bleeding through the edge of the screen. But like I said, I've not experienced this on any of my screens at all. I say screens because this is my third, maybe fourth G9 Screen.

My first screen was PERFECT. Not a single issue at all. But then Amazon Prime day came, and the screen dropped by £200. So I decided to save the money and re-buy it cheaper. Except that one had issues. Then the next one had issues. Until finally I did get this newer screen, which doesn't have problems other than those local dimming issues that I mentioned, to begin with.

Would I recommend the 49" Samsung G9 Curved Ultrawide screen to you right now, if you were looking for one for productivity? 100% Yes! Because this is currently the only 1000R Curve screen that I've come across, and that 1000R Curve makes a difference.

Those other 49" screens tend to have a shallower curve and I found myself having to stretch my neck sometimes to see the very corners of the screen. But with the 1000R curve, all you need to do is turn your head, which feels far more natural than having to physically move and stretch your body to see something.

That is the reason why even with a few technical issues - I couldn't move to any other screen right now until someone else brings out a 49" 1000R Curved screen.

If you want to see more about tech, finance, and business, subscribe to the channel. Thanks for reading!