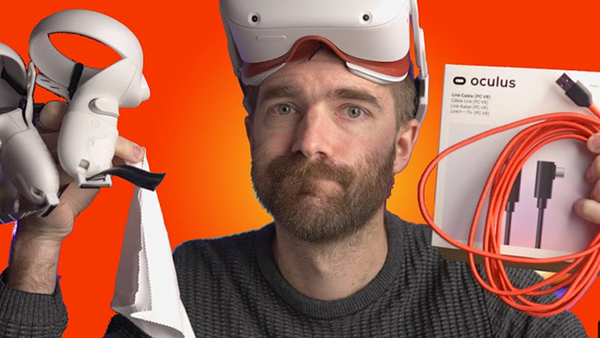 Affordable Accessories for the Oculus Quest 2

So, you’ve got your Oculus Quest 2 Headset and now you’re wondering what other gadgets you should get for it?

After I’ve talked about the best accessories for the Oculus Quest 2, I’m also going to tell you a little bit about the Oculus Link and how there is a better way than buying the stupidly expensive cable.

One of my biggest complaints in terms of using the Oculus Quest 2 for fitness (which I got blasted for in a previous video for using it for fitness) was the issue of the lenses steaming up every time I exercised. I know I got a ton of comments about how I was an idiot for using it for fitness, but news flash, outside of just generally playing games, fitness is one of the biggest use cases for the Quest 2, particularly given that we are in the middle of a pandemic here in the UK. The gyms are closed and the weather is too bad to go out for a run.

I had a tonne of suggestions for the lenses fogging up. “Drill a hole in the headset”, “breath through your mouth”, “get a different headset adapter that gives you more space to breath”. But a) I didn’t fancy drilling a hole in my headset and b) why should I have to try all of these stupid things for a product that was designed for fitness to be a use case in the first place? And just in case you’re wondering, I did use my T-shirt to clean the lens.

The thing I did try was a pack of super cheap, anti-fog, microfibre cleaning cloths for glasses from Amazon. I’ve only used these things once or twice but so far they’ve pretty much stopped all of the lenses fogging up entirely so they get a big recommendation from me. If you are having an issue with your lenses fogging up, these things will be great for you. Also, why doesn’t the Quest 2 come with a microfibre cloth to clean the lenses anyway? I guess another way to save money by Facebook?

When it comes to the best carrying case for the Oculus Quest 2, I’m going to have to concede. In terms of price and quality, the official Oculus Quest 2 carrying case is really great. It’s solid, it’s snug, it’s a great place to be able to put all of your Oculus Quest 2 for travelling and when you’re not using it to make sure that the lenses are being protected.

Others I tried, tested and returned, I found were loose, poor quality, they would fall apart and just basically fail at the purpose of protecting the Quest 2. So if you need a case for the Quest 2, I would highly recommend the official one. If you are using controller grips you do need to be aware that you might not be able to fit them into the case. You will probably need to take the controller grips apart, put the controllers in them and then store them down the side.

The next thing you will want to get yourself is a Quest Link Cable. With a Quest Link cable, you can play VR games from your gaming PC onto your Quest 2. This is amazing! Honestly, if you check out my video you can see my top recommendations for games and there are some killer games to play using the Quest Link.

With cables, there are two options. There’s also a third option I will talk about later. There is either the official Oculus Link cable a whopping £89, and this thing is 5 metres or 16 feet, is super thin and technically bang for the buck. It is actually a fibre optic cable which makes it super light and thin which is a really great option for using the cable but do you need it? The other option is a 3 metre (10 foot) Quest Link cable from Anker which is double branded, nylon and doesn’t have the right angle connectors, nor is it quite as thin or as light as the official cable but this thing is just £9.99.

An insane difference in price and something that when you actually hook this thing up, makes no visual difference in the headset when playing games. the differences between the two are the three-metre versus the 5-metre lengths and the official link cable is certainly lighter but I don’t think it’s actually thinner. So, would I say it is £70 easier? Probably not and not at all when you check out my third option at the end of this post.

Let’s talk head straps! The Oculus Quest 2 basic version has one of the worst straps available, definitely a downgrade from the Quest 1 and it’s one of the reasons the headset was so cheap compared to the first generation. The go-to option would of course be the Elite strap which comes with the headset if you bought the most expensive model. However, at the time of writing this post, the Elite strap is sold out everywhere, pretty much worldwide, but it was also getting some pretty bad feedback too. Reports of it snapping and cracking and generally breaking so I had to look elsewhere. There was a £30 option with Amazon with all the reviews saying it was as tacky as anything and then I found something at a very similar price to that of the Elite strap at around £50 but all with 5 stars and generally great reviews. So I thought I would give it a try.

To begin with, I was a little bit miffed, the thing came essentially in just a plastic bag in a few pieces that you had to click together. But I have to say, this does make the headset more comfortable to wear than the basic one and far easier to adjust using the bike helmet, clicking mechanism on the back. Overall, this is a huge upgrade from the basic strap. Obviously, you can’t compare it to the Elite strap which is super impossible to get hold of right now. But I guess the demand of people buying the cheap strap as I did and then realising how bad the strap is, forcing them to then have to buy the Elite strap is the reason why you can’t get hold of it.

I would definitely give the strap I found a try. If it doesn’t work for you simply box it back up and send it back to Amazon with their simple to use return policy which I will be taking advantage of with the stupidly expensive Oculus cable.

One thing I did get that wasn’t from Amazon was a replacement surround for the headset. Basically, the stock fitting just pops off and a new one clicks in. The one I got is from VR Cover and it has passive air vents, replaceable leather foam around the outside and the nose guard, and basically means this thing is great for those of you who do work out with their Quest. You can wipe it down and the nose guard means your breathing won’t fog up the lenses when it comes back up into the headset as it does with the OEM one. This thing fits super easy, it literally takes seconds to take off the old one, fit the new one and it feels more comfortable than the OEM1. IN my opinion, it is well worth the upgrade if for you the stock fitting that comes with the headset just isn’t up to scratch. VR Cover also have some nifty accessories specifically for the Quest 2. They have controller grips, silicone covers, and lens covers which I also bought. They give that extra layer of protection when you set it down and for me, that means my cat won’t put his head down and start licking the lenses.

Speaking of grips one of the things that kind of frustrates me is the loose straps around your wrist, so I thought I would give some different grips a try to see if they helped and guess what? I came across some grips designed specifically for the Quest 2 controllers which completely do away with the straps that loop around your wrist instead. By using an elastic strap which you slide your fingers through, meaning you can hold onto these controllers without actually holding onto them. They give you a great feeling in the hands and stop you flinging your controller at your TV and best of all, they stop you accidentally sliding the battery door off the controller when playing which happened to me all the time on the Quest 1 and has happened a handful of time on the Quest 2.

Ok, so we’ve covered the top accessories to use for your Oculus Quest 2. What about the third option of the Oculus link? The answer is not to use any cables and instead use virtual desktop. Using virtual desktop you can wirelessly  use your Oculus Quest Link from your PC to your headset so there are absolutely no wires involved at all, there’s nothing to trip over or get tangled in just complete wireless free gaming like you’ve been used to with the Quest 2 but with the full power of a gaming PC if you have one behind the scenes

First up, one of the biggest issues I hear people saying all the time is that their internet isn’t fast enough. Let me tell you that this has absolutely nothing to do with using Quest Link over wireless. If you have a poor or slow internet connection you can still use Quest link as wireless because it uses your home wireless, not your internet connection. So, if you have a fairly new wireless router or wireless access point then you probably have the thing you already need to get started. Ideally, you want to have your gaming PC wired into the network by a network cable to your router and then you use your quest headset either in the same room or as close as you can to the wireless access point or router. This is so you can get the best speeds possible over wireless. If you do this you will get the best experience possible, as good as the link cable if not better because now you are 100% wire-free once again.