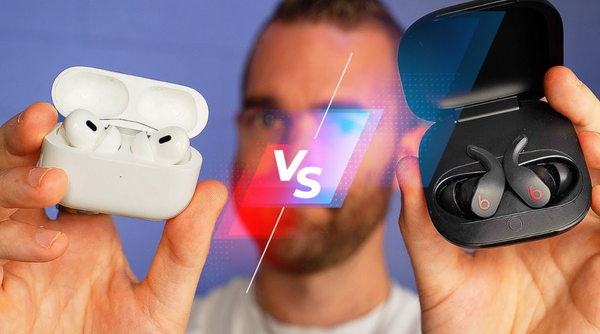 The Beats Fit Pros have been my go-to earbuds for a while now. But I’ve recently been wondering how they would perform against the recently released Apple Airpods Pro 2s. I’ll be considering the price, performance, comfort, reliability, battery life, and suitability for strenuous exercise.

The Airpods Pro 2’s vs the Beats Fit Pro - Fit, Form and Function - over the latest and greatest technology that Apple has to give.

Today we’re putting these earbuds up against each other to try and answer the question of which one should you buy.

So let’s start by comparing the Audio Quality.

I tried listening to a number of tracks - whilst swapping headphones, sometimes even using one of each headphone to try and tell a difference - but actually, I really couldn’t tell much of a difference when it came to audio quality.

If I really am picking at things, I’d say perhaps the clarity on the highs with the Beats Fit Pro isn’t as strong as with the Airpods Pro 2’s, but overall - they’re both really great headphones, the sound quality is incredible - and for the size of them, there’s a surprising amount of bass that comes from them too.

I was listening to some Architects for anyone who’s into that, and you can hear the kick drum, all the way through to the higher-end cymbals.

I don’t think you’re going to really notice any differences unless you’re a true audiophile, so I would call this a draw between both of them.

For noise cancellation I had no music playing, and instead, played some background noise so I could tell you how much I could hear.

With the Airpods Pro 2, it was OK when I played the sound of a car, I couldn’t really hear much - it was like a background drone noise - BUT, that really annoying PTSCH noise they’ve added really cut through, I heard that clearly.

Next, I played the sound of a train and I could just about hear a high pitch noise.

When I played the sound of a bus I could hear it again, it was faint but I could still hear it. This is where I actually heard the adaptive noise cancellation kicking in for the first time, I could actually hear it change as it tried to adapt to filtering out the Bus noises - which was pretty cool. That’s something that the Beats Fit Pro doesn’t have - but it was still pretty good.

I guess that explains why the other annoying noise came through because it wasn’t a consistent noise, which can be good and bad… interesting.

When playing an Airplane sound, I could barely hear the plane itself but when I played the sound of a baby I could hear it.

When playing office sounds, I could hear what sounded like the shuffling of papers and keyboard typing I could definitely hear. I couldn't actually hear any of the background noise like the people talking - it was spookily quiet and really good! When playing the sound of a monkey I could hear it - it was quiet, but it was clearly a monkey.

Next up I played the sound of Boris Johnson and that, I could hear.

Interestingly, if you wear an Apple watch and have the Airpods Pro 2’s, the noise app on there will tell you how loud everything is, but it will also read off how much it’s reducing that noise around you too. That’s something I’ve not seen before with any other headphones.

The main differences for me with the Beats Fit Pro were with the train - it was definitely clearer to hear and more of the high frequencies came through.

The bus I could hear again, it was much clearer than the Airpod Pro 2’s.

So for the Noise Cancellation - I’d give the edge slightly to the Airpod Pro 2’s, not by much though! It wasn’t as incredibly amazing as all the YouTube reviews I watch seemed to make it out to be.

Anyway, discussion for another time! let’s talk about Transparency mode.

I couldn't actually tell the difference as to what I was hearing, then when I didn't have the AirPods in… that’s incredible! Literally, the only difference is that I know I’m wearing headphones. Everything sounds identical… it doesn’t sound like anything is processing the audio and then feeding it into my ear.

I think if I was to be really picky, maybe there’s just a SLIGHT lacking of bass, but that’s basically it.

Over to the Beats now...

It was still very good! I could feel that I was still wearing headphones if that makes sense. There was more of a feeling that I have maybe, really thin earplugs in. It still sounded very clear, but I think the Airpod Pro 2’s were the best sounding - it’s hard to describe.

However, with the Airpod Pro 2’s in I could still hear the background noise of the fans whirring on my NAS drive which was behind me.

With the beats fit Pro I couldn't hear that. So even in transparency mode, it was still enough to block out some very quiet things around you.

The clear run-away winner on transparency was the Airpods Pro 2’s. They absolutely take the win.

But let’s not forget ourselves, because next up we have the fit, and this is my biggest gripe about Apples Airpods in general, for a headphone that’s had billions in product development - they just don’t stay in my ear.

But before I get into fit, let me just do the comparison for you…

The Airpods Pro 2’s come in 4 sizes, instead of 3. X-Small, Small, Medium, and Large - and none of them stay in my ears!

Yet, when I run the fit test on my iPhone, all of them tell me they’re an excellent fit! Go figure.

But to truly see my problem - I counted how many seconds it took to shake these earpods from my ears and it took 2 Mississippis for one to fall out. Plus a headache!

Now I know that fit is something that is subjective to everyone, and some people just have the right ears to fit the Airpod’s / Pros and such - but I’m not one of them.

Actually, I’ve seen this with so many of my friends as well - so I’d love to know from you, the reader, please comment below and let me know, don’t you find the Airpod Pros just don’t stay in your ears?? Maybe we can count up all of the votes to see what the general consensus is.

This is - at least for me, is where the Beats Fit Pros just win outright.

I did the same test and ended up with a headache! I couldn’t actually make them fall out of my ears.

That’s because finally, someone decided to put a little rubber arm on the top of the earbuds which actually keeps them in your ears.

The main reason why the Airpods don’t stay in your ears, I feel, is because of the silicone tips on the end of each Airpod. Instead of using Silicone, they could use memory foam tips, they would do a far better job at staying in, in fact, I actually made a video last year about how memory foam tips fixed my issue with the last generation Airpod Pros. When comparing the fit to the beats fit pro’s - it’s just no comparison.

In terms of features, we’ve got very similar things here - with a couple of differences.

There is hands-free support for Siri which is great. You can do all of the usual controls by touch to play, pause, skip forward and backward, you can press and hold to switch between noise cancellation and transparency modes, and only on the Airpod Pro 2’s, you can also swipe up or down on the stalks to change the volume.

You can change the volume with the Beats, but you have to go and change the behaviour of the buttons, so by doing that, you’ll lose other features - it’s a choice of one or another.

Within the App itself you can also change transparency settings, and change what actions come from pressing and holding the buttons, or stalks, there’s an ear fit test - which for me shows Excellent on all of the sizes that come included on both headphones, and there’s spacial audio which does actually, sound pretty incredible when you watch or listen to anything shot specifically for spacial audio. You can also use Apple’s Find My network, and this is where one of the main differences comes into play.

On the Airpod Pro 2’s, you can find The case and both Airpods, individually, and ring them each, individually.

Given that the Airpod Pro 2’s magnets that hold each earbud inside are actually really weak, which means the default behaviour when you drop them on the floor, is to open up, and spill the beans, so to speak, and then somehow close themselves after - is quite a reassuring thing to have.

With the Beats Fit Pro, you can’t locate individual earbuds, and whilst you can play a noise on them, it’s playing a noise on them, the case itself doesn’t make any sound. And when the earbuds are in the case, closed - nothing happens, because they’re not actively connected whilst in the case. However, the magnets in the earbuds are MUCH stronger, I can literally pick the case up with the earbud, that’s how strong the magnets are in this! So when I drop the earbuds on the floor from a pocket height, they don’t fly open as the Airpod Pro 2’s do.

That’s a key difference with how the Find My feature works across both of these.

Also for features, the Airpod Pro 2’s are IPX Rated - which means they’re sweat resistant, but not waterproof or sweatproof. Whereas the Beats Fit Pro are IPX4 rated, they’re splashproof. The Airpods Pro 2 will be fine for workouts, but just be careful they don’t get splashed when coming out from the shower or anything like that.

Otherwise, it’s just USB C Charging, which is the only option for the Beats Fit Pros.

Battery life is 6 hours for the Airpods and the Beats on a single charge, and the case provides up to 24 hours in total - so they’re identical here.

With the Beats, as far as Microphone quality goes - I’ll leave it up to my editor to score the audio quality based on what he thinks sounds best. Go ahead and watch my video to hear the playback sound to see what you think.

Pricing is where there is quite a difference - £249 for the Airpod Pro 2’s - which is really quite high, the beats fit pro is £219 but can be found for £179 online, so £70 cheaper… and honestly, I’m still digging the beats fit pro for that price.

Unless you’re one of the chosen whose AirPod Pros don’t just fly out from your ears constantly, then the only real difference between these is the ability to use Find My to ring the case and each earbud separately - which is cool, but would it make you want to buy them over the other?

Let me know in the comments what you think - and I’ll see you in the next one.