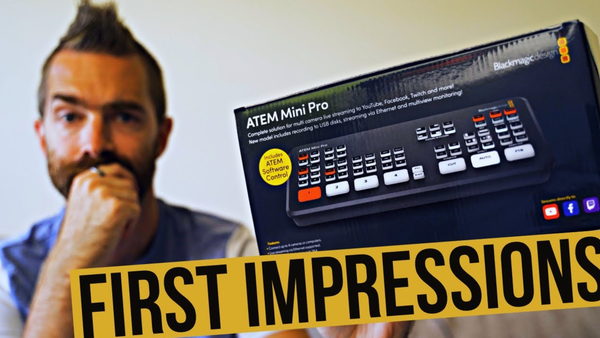 For those of you who aren’t aware of what’s going on in the world right now, you might have instead noticed that video streaming equipment is pretty much sold out worldwide right now.

For those of you who want to put out professional content - and by that I mean by not using a built-in webcam on your laptop that gives everyone a clear view up your nose!

No, I’m talking connecting a professional DSLR or a mirrorless camera up, maybe setting up some good lighting, a good Mic for audio, and either using this for your Zoom meetings or perhaps your LinkedIn or Facebook lives.

It’s an Elgato Camlink 4K, which I sold on eBay when I realised that selling the 3 Camlinks I owned, could cover the cost of buying this one device.

The Camlink works as a clever stick that converts an HDMI cable into a USB, and essentially takes an HDMI feed from say, a Camera, and presents it as a webcam into your computer.

I had 3 of them, so we could connect up to 3 devices. That could be 3 cameras, or 2 cameras and a laptop - and we used it for live-streaming interviews and podcasts on our social platforms.

It worked fairly well - but we ran into issues fairly often. OBS, the free streaming software we used would often introduce new bugs with every update, and we’d find issues like cameras freezing mid-stream or audio going out of sync, it was a tough job to manage. Combine this all with needing a good enough PC or Mac to connect this all into and run the streaming software and it was quite a thing to keep running smoothly.

Introducing the ATEM Mini Pro, which replaces all of that with a single box.

This thing lets you hook in up to 4 HDMI sources, it sorts any differing framerates and audio sync internally and doesn’t need to be connected to any PC as it can stream directly from the network port on the back of it. You can switch inputs by using the clear buttons, and you can even record directly to an external USB drive.

With that all said, you can still connect it to your computer and use it as a webcam interface, just like the elgato’s and use OBS if you so wish.

These are currently impossible to get hold of, just like the elgato, but here's a link where you can order yours from - as by the time this goes out there should be way more stock flowing to suppliers!

In my opinion, £650 for this compared to what is currently £200-£250 a pop for a single HDMI Camlink without any of the extra features, makes this a no-brainer, for me.

What’s more exciting, is that you can buy the nonpro version of this for just £290 which will still let you switch between multiple inputs and many of the other features, you just need to run it through your computer still as you can’t stream direct, but that’s still a steal when you compare the cost of 4 of the cam links.

So if you are thinking about upping your game with Your live streams, then for business, my go-to would now be this, instead of the Elgato, which was actually designed more for gaming, but since it’s pretty much the only device that did what I needed, it’s all we had - until now!