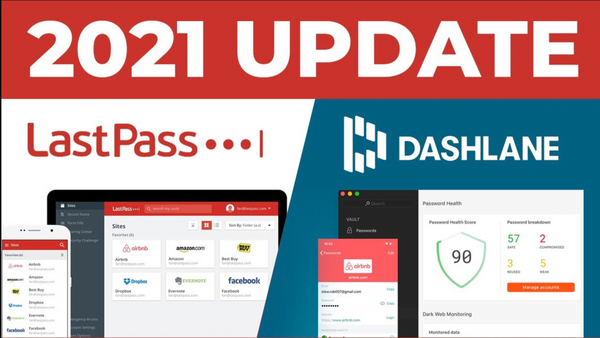 You may have recently seen the announcement that LastPass are now significantly restricting users of their Free version of LastPass, allowing only one device TYPE to be used to access the password database, and that Dashlane is going browser only with their plans.

With LastPass, this means that you'll only be able to use LastPass on a computer, but an unlimited number of computers OR commit to using LastPass on Mobile only.

As of the 16th March 2021, your first login after this date will set the active device type, though you do get 3 chances to switch between device types before it locks you in.

Furthermore, on May 17th 2021, free users will no longer be able to get support via email, limiting you to their knowledge base and their community forum.

In the mean time, they have now discounted LastPass Premium to just $2.25 per month when billed a year up front, or $3 per month for LastPass Families which is valid for the first year only, and will then upgrade you to the regular pricing.

I'm making this video because I've been inundated with comments on my Password Comparison video, which compares LastPass, 1Password, Bitwarden, Dashlane, and a few other password managers.

With both LastPass and Dashlane making some big changes to their products - I wanted to make a short post to discuss.

For those who keep asking - a new password manager review video and post is in the works - I'm re-testing all the password managers once more, so when that's ready I'll be posting it on my YouTube channel - probably in the next 1-2 months as I want to make sure I'm doing it properly. So, subscribe if you want an updated version, or if that's too long to wait then watch this, then go back and watch my Password Manager review.

LastPasses recent changes actually make sense to me. You obviously need to generate an income to be able to continue developing a product, and in my last video I did say that LastPass seem to be the one Password Manager that spends the most on their marketing.

So spend a LOT on marketing, get a LOT of customers.

Which introduces a problem. Because the sponsorships and marketing that LastPass does are going to generate a lot of new customers for them - I mean, it must do, because they've been advertising for years, But I would be VERY interested to know what percentage of those customers are actually paying for the service.

Whether it's accidental or planned - LastPass has a problem of being flooded with free users who aren't paying anything for the service, yet still need to provide all of the infrastructure behind the scenes to keep it all running.

Now they've got a tonne of new customers, all they need to do is announce some pricing changes like they have done now, tempt users to upgrade with a special offer and assume there'll be some fallout of free users who go elsewhere. They're onto a winning formula.

Great business model, but not great for those who have signed up expecting a free ride.

Over on the Dashlane camp, news broke earlier this year that they were dropping their Desktop App to focus on just their browser extensions. This is probably more frustrating for those existing paying customers, who are likely to be in the same camp as Lastpass users, needing to find somewhere else to centrally store their information.

With Dashlane's planned changes, which are set to come into effect later this year, you will not be able to use Dashlane to automatically fill passwords into your desktop apps - and actually, will become very difficult to use, in my opinion - because have you ever tried to log into something, then fire up your web browser, go into the settings, show passwords, find password, then copy and paste back and forth... It's just not usable to me.

Where does this leave us then? Well, keeping this post short.

My recommendation is, until I get time to re-test all of the other password managers, that if you're currently using the Free version of LastPass or Dashlane, then move to Bitwarden.

If you're currently a paying member of either LastPass or Dashlane, then sign up to 1Password. Here's a link that gets you 25% off of a 1Password description, and 25% off a families subscription too.

Head over to my channel and subscribe to see when I do my full comparison, and in the mean time go back and watch my full password manager review from late last year. Here's a review on 1Password.

Thanks for reading, see you soon. Bye bye.​