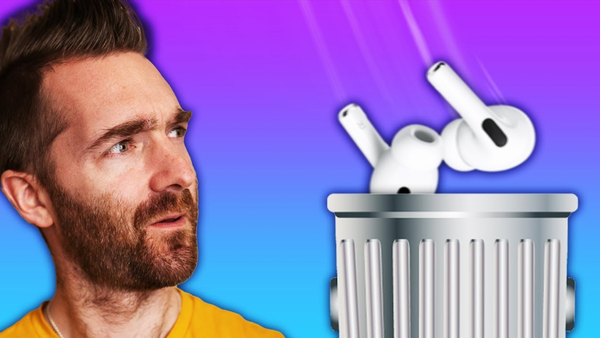 The Apple Airpods are basically the ONLY option for us Apple users. Or are they?

The Sony WF-1000XM4's were released only a couple of weeks ago but I managed to snap them up from Amazon, even though they appeared to be sold out everywhere else.

I bought them because the AirPods DO NOT stay in my ears. The AirPods, have probably had millions of dollars worth of research spent on them to make sure they stay in people's ears, yet they don't stay in mine!

Weirdly, the original AirPods actually stayed in my ears better than the pro versions. So, since I've been playing with Android phones lately, I thought I'd try a similar thing and switch away from the staple of all Apple users, the Airpods.

They have all of the usual features, noise cancellation, passthrough, touch controls, all of the things you would expect, but let's get on and give them a rundown...

How do these things fit compared to the AirPods that just don't stay in?

Well,  Sony is using foam for the earpieces instead of silicone tips on the AirPod Pros, which means they fit the ears so much better. It also means they are much better at blocking the outside world because the foam expands to fill all the little gaps that silicone ear tips might leave.

The only negative I can find here though is that the XM4's are 2 grams heavier and feel a little bulky in the ear, whereas the AirPods are as light as anything, even though they don't stay in...

Next, we have Sound Quality, and again - a HUGE improvement, in my opinion, over the Airpod Pros.

This is probably because of the better isolation with the foam tips again, but you definitely hear richer bass and just generally overall a punchier sound. I've really enjoyed listening to music with these earbuds, and I definitely don't get that same level of enjoyment out of the Airpod Pros.

One issue I had with the Google PixelBuds was that once I left the room with my device, they would cut out almost immediately. Well, I'm glad to say no issues like that at all with the Sonys. I can quite happily walk to the kitchen to work on building my impressive dad bod, without dropping calls or music that I'm listening to.

But so far, nothing can quite beat the range of the AirPods, where I can pretty much walk around any room in the house without them breaking up - which is really impressive, given that in my house, wireless barely reaches from room to room due to the thick walls.

Now let's cover off some features - and some which are quite unique to the Sonys. First up is Speak to Chat.

You'll need the Sony App for this, as you can't enable this from just the headphones themselves. Here you can configure things like whether you want them to focus on voices but still suppressing other noises, and then how quickly the earphones go back after you last say something. That's a really nice feature to have over the Airpods and one I've genuinely used over the last few days of travelling in busy environments.

Though it's a bit weird because if you sneeze, it opens the gates up so you can hear other people for say, 30 seconds before then shutting down and blocking everything out again.

And yet another amazing feature of these Sony XM4s is a feature called Adaptive Sound Control. Essentially this is a clever, GPS-enabled feature that lets you define how much noise you want to let through when doing certain things, or being at certain places. Like Walking / Waiting / Travelling.

This is a really neat feature because you get to personalise how you want your in-ears to sound whilst doing those activities, and like the AirPods, you can just do a quick tap to switch to pass through if needed, or alternatively, you can just hold down the left bud for it to let sound through until you release your finger.

Here you also get a feature called Wind Noise Reduction too, and I'll have to give it to them - they've got this one down!

You know when you're on a phone call with your headphones in, and you're outside, and it's not even THAT windy but you just get the white noise from the wind blowing against your ears?

You don't get that with these, or at least not in this blustery British summer weather anyway!

These headphones work with all the voice assistants. Google, Amazon, and Siri, though the only feature you really lose here is that these won't trigger Siri by voice, you have to hold your finger down to trigger Siri. That does kind of suck because holding your finger down does take a little longer, which isn't so great and is really slow compared to just asking Siri to do something for you. I do sometimes use Siri when running to quickly skip tracks so this might be a pain for me.

Since the voice controls aren't that great, what about touch controls? Well, good and bad. Again, holding your finger against your ear to enable transparency, firstly takes a few seconds, and secondly looks weird compared to holding on to the Airpod Pro Stalks.

Otherwise, the controls are great! You get a little more than on the Airpods too. You can skip forward, back, and also control volume up and down, which is something the Airpods can't do.

When it comes to charging - these Wirelessly charge on the bottom, so no issues there, and they have 8 hours worth of battery in the headphones themselves, with a further 16 in the case. That's a full 24 hours of battery, and that's with noise reduction enabled. This is double what the Airpod Pros get you.

Admittedly they are a little bulky in the ears, but then again you don't get those white stalks hanging from your ears too - depends on your personal preference!

Other features just to mention - these headphones are water-resistant up to IPX4, so the same as the Airpod Pros, and have a case that's a little bulkier than the Airpods, but still fits well in the pocket. Oh, and they're also black, did you notice? SO nice to have headphones once again which aren't white and sticking out like a sore thumb!  You can buy them in white though if you want to.

Something I see happening to every AirPods case I see is after a few months, you just get a collection of dust and dirt around the white case, which looks a bit gross. One way to avoid that? Black headphone case!

Now the only feature which you MIGHT miss is their new spacial audio which Apple have launched with their range of Airpods headphones. These Sony's do have a 360 audio feature, but it's only supported in 4 services, none of which I'm subscribed to. But, when I'm out and about I rarely watch movies on my iPhone, so this for me, isn't a huge deal-breaker right now.

There's one thing that I haven't mentioned yet, and that is price. Because thee Apple Airpod Pro's, are £250.

This makes these headphones incredible for the price, considering they cost the same but, in my opinion after using them for the last few weeks, are SO much better.

I only wish they had the Siri voice assistant built-in so you didn't have to press a button, but otherwise, you should buy them - and here's a link that will get them at one of the cheapest prices around.

Otherwise, Hi, my name is Pete, and you've been reading my blog. If you like it, head over to my YouTube channel for lots more of this kind of review.