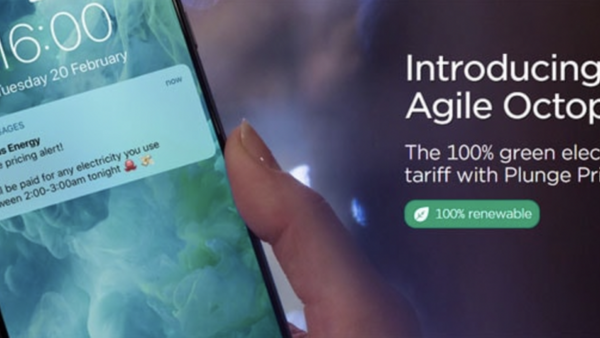 How to Get the Cheapest Electricity With Octopus Agile

Do you want to get PAID for the electricity used to power your house?

Yeah… it’s a thing! And I’m not talking about solar panels or battery storage or anything funky or expensive to install like that.

Octopus Energy is a relatively new energy provider here in the UK who were founded in 2015. And whilst they’re not as well known as the likes of British Gas, or EDF Energy or any of those ‘household names’, they are doing something very unique that nobody else is doing right now, to my knowledge. Octopus has introduced some incredible smart tariffs that will help you to pay less for your electricity.

Their Octopus Go and Go Faster rates, for example, gives you a 3 to 5-hour window overnight, which can start from something like 8 pm in the evening, and has a fixed price of around 5p/kWh. Compare this to other companies who are charging something like 14p / kWh and you’ll see how nuts that is! Outside of these hours with Octopus you’ll pay around the same 13-14p/kWh, but this means that if you can be clever, and schedule everything to run overnight, dishwasher, washing machine, tumble dryer, charge your laptops, charge your phones, your iPads, camera’s… the lot – then you can massively cut down your costs.

Taking this one step further, we have actually paid to have Solar Panels installed, and we also have a Tesla Powerwall battery pack attached to the house, which literally works as a battery to power the house. Using Octopus, we can charge the battery overnight, and then power our whole house using that cheap electricity. So what about getting PAID to use electricity?

Octopus has another tariff, called Octopus Agile, and this is where things can get really clever. On Agile, the price you pay for electricity changes every 30 minutes. Now I’m sure you’re probably thinking ….Ahhhh, that sounds complicated! But no. If I scroll through the prices I’m paying tomorrow, my price is way, way below that 13-14p kWh, and the reason why I made this post is that actually tomorrow, prices are hitting an ‘unprecedented….’ [wink] price that I’ve never seen before.

Because tomorrow there are 12 1/2 hours in the day where I am going to be paid up to nearly 11p per kWh of electricity. Only until it hits the peak time of 5 – 8 pm does it jump up quite high. What does this mean? Well, if you can shift your usage somehow to outside of those peak hours, then you are once again far better off – even without the plunge pricing when pricing goes negative. Typically this happens on particularly windy, or sunny days, and basically, when the grid has generated too much power – this is when prices really get fun, because around 35 times in the last 12 months, electricity prices have dropped into these negative figures.

That means – Switch on EVERYTHING. Charge your electric car, fire up the oven, washing machine, dishwasher, tumble dryer, TVs on… Laptops… haha! Because you will literally be paid for the amount of electricity you can consume in those times. What that means for those of you who do have battery storage for your house, and maybe electric cars – is that you can actually be paid to fill your car up.

Imagine going to a petrol station and being PAID to take away petrol… oh wait, hang on…. forgot – coronavirus – that actually DID kind of happen! But unlike a worldwide disaster, the Octopus Agile negative pricing happens multiple times every year, so it’s not uncommon. And that is how you can get paid to use electricity.

If you’re interested, then like most companies do – I have an affiliate link that will give you £50 if you sign up – and yes, I also do get £50, but I’ll… spend it on trying to improve these posts a little more so the next one you read is just that much better. There are no contracts, you can leave or switch tariffs whenever you want so there’s no risk at all here.

Worst case, switch over, take the money and switch back again.