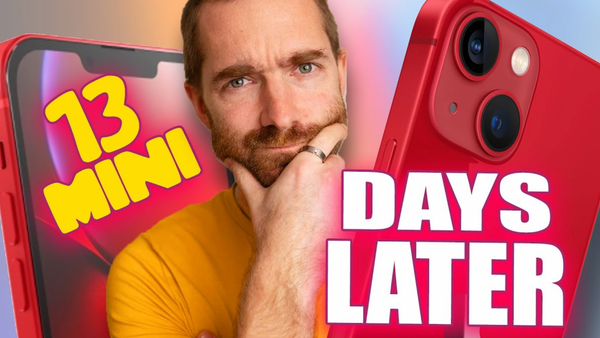 The iPhone Mini is something that got such huge approval last year, with notable influencers saying how much they all liked it and were switching to it - mostly driven by the fact that we were home bound and didn't really need a massive tablet like Pro Max sized phone whilst we binge watched the latest Ted Lasso episodes.

But in 2021, where things are starting to get back to normal - is it really as good as everyone made us believe?

In front of me I have all of the new iPhone 13 models, and this iPhone 13 Mini is BY FAR, my favourite colour of them all. A really deep and rich red colour which when you're looking at the screen, gives you a cool red border, and can even be seen whilst using the Apple cases too which I thought was cool.

I do wish they made this colour available for the Pro Range, but - there's always next year.

I decided to upgrade my iPhone 11 Pro Max this year to one of these phones, as well as an Android phone which I hope I'll be able to buy and test very soon - but the 13 Mini is tiny. Even when put next to the iPhone SE, it's still smaller, but a little thicker than that, though it weighs around the same.

This year with the Mini there aren't a huge number of differences to the Pro line up.

You don't get 120Hz, and you get 2 cameras, not three. You're missing the 3x telephoto lens on the back but you get the same A15 Bionic chip but one core less in the GPU which for most people, really isn't an issue and finally one thing that I haven't seen mentioned by many others is that the Magsafe wireless charging on the Mini and only the Mini, is restricted to Just 12 watts and not the 15 that all the other models get. But other than those differences, that's basically it.

So this year you can basically pay half the price of a Pro Max, and get mostly, all the same features.

Battery life is the first concern whenever I talk to people about the mini, and whilst yes, it has improved on last years - in my experience I really struggled to get to the end of a typical day without a charge. So personally, if you are anything but a heavy phone user, you'll probably be OK. Otherwise you'll want to carry around a portable battery pack with you - Let me know in the comments if you'd like to see a review of all those.

Now what comes with a small size and battery, is that this thing is really small, it fits in the palm of your hand though I will say not as comfortable as the iPhone SE due to the sharper edges, but it is really light. It's such a weird sensation going from the bigger 13 models to this because it is just so tiny.

I've also attached the new Magsafe wallet which fits perfectly on the back, though it does basically double the size of your phone - but means you can fit it all in one pocket nicely without a separate wallet - and the addition of find my means you stand a better chance at finding your wallet if you're ever the type of person to just lose it or leave it behind somewhere.

The notch of course is apparently 20% smaller, but right now, that really doesn't matter because Apple have just made everything else that was up there about 20% bigger. Hopefully that changes in a future software update but we'll see.

Speaking of size, yes, the camera bumps, are big. It still wobbles if you place it on the desk and tap on anything except the opposite corner, but actually if you use a Magsafe wallet and attach it to the back, it stops that from happening. So, useful tip there if you use one.

The 13 and 13 Mini gets an Ultrawide and Wide Camera, and whilst the physical cameras themselves are slightly different, the fact you can buy an iPhone 13 Mini and get photos which are just as good as the top of the range iPhone 13 Pro models, is amazing.

The one complaint with the iPhone SE for comparison, was that you'd be sitting there and tapping the shutter button then have to wait a few seconds for it to actually take the photo - that's not a problem on here. Instant reaction, and it can take some really incredible photos, and Video!

Even on this basic mini model of the iPhone 13, we get the Cinematic Mode features, which adds that background blur that you see in lots of higher end cameras.

I mean, it's no comparison for them, but it's incredible to see what Apples first generation of this feature can do.

Yes there are inconsistencies around hairlines and the edges where it's trying to determine where the blur should be applied to so it's not perfect, but as a first attempt it's really impressive.

With that said, It only shoots in 1080p and only at 30fps right now, so hopefully in the coming years that will bump up to 4k and in more than just one frame mode.

The one thing that does blow my mind, across all of these phones, is that after you have shot the video - you can go into edit mode on your phone and change things. Much like portrait mode you can control the aperture so it doesn't look so harsh, but you can also change the focus point of the video. THAT is a really cool feature, and one that means whatever you are shooting with an iPhone, even if it's focusing on the wrong person, you can fix it after you have shot the video.

Magsafe accessories so far are all good, and I'll be making a video hopefully soon about what to buy for your iPhone 13 so subscribe to the channel for that, but I would say that if you aren't a heavy phone user, and you just need something to get through your day, that's small, light and easy to use, then this is a really great buy right now. Otherwise I'll be posting videos around the other models on the channel, and I'll see your smiling faces again, very soon! Cheers!