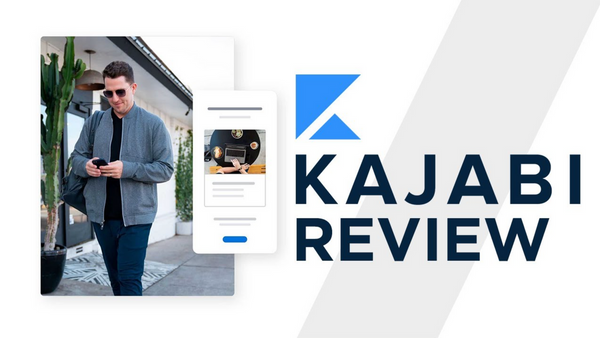 Kajabi Review | Is this the Best Online Course Platform to Use in 2021?

I've just wasted over £5,000 developing a website for my IT Coaching business in WordPress, and I ditched it all for Kajabi.

Let me tell you why.

One of my business ventures after selling my business last year is to coach other IT Business owners. My plan, over time, was to build out a website where they can sign up, get access to templates, resources, and over time allow me to build out training courses.

And we almost got there!

I worked with a web developer who did a great job on the WordPress website. Came up with a great design, but with all the little tweaks around signing up members, integrating it with a CRM, having the optional ability to sell separate courses or resources which I plan to create over the coming months and years.

We were using plugins completely against the way they were intended and to cut a long story short...errrr... I switched to Kajabi! What the tech (wink) is Kajabi I hear you ask?

Kajabi is like WordPress on steroids but built specifically for membership websites. And I'd never heard of it before!

Actually, I lie, I had heard of it before. But I'll be honest - I took one look at their monthly pricing and just went noooooope, and then got back to throwing money at fudging a WordPress site together. More on that in a sec.

Kajabi is an all-in-one service that you can use to run a membership platform, run courses, training modules, and even sell both physical and digital products.

It's a CRM, Automation, and Sales system all in one, and it's SO easy to use.

Literally - I thought I found a game-changer when I discovered Divi for WordPress, which kind of makes WordPress drag and droppable but Kajabi takes it all to a new level.

And because of how easy it is to use - and after spending 5 grand on my WordPress website which took months to build - well, I built, my entire website in around 2 days.

Now admittedly I did already have a design that I mostly copied from that 5 grand WordPress website, but I couldn't exactly flush all of that investment down the toilet. With that said - that's still a pretty damn good achievement to build a whole new website in just 2 days.

With all of that good stuff said, there is some bad stuff that I do want to address - because it did become a pain in the rear trying to figure a couple of bits out.

Number 1. The CRM System is pretty good and can do a lot of the things that I want. But it's not as flexible as the likes of Active Campaign - which is probably my favourite CRM system right now, and in fact, it's the one I use and still use to this day. So, currently - I can't ditch my CRM.

Number 2. Tax. This is something I just don't understand, but if you are a business that needs to charge tax. Kajabi won't do this out of the box. You have to look at other systems which can calculate and invoice tax properly. For me, the fix for this was using Thrivecart.

But outside of these 2 issues, for me - it's all good news!

Using Kajabi and Thrivecart together, I can easily sign up customers who enter their credit card details, sign up to a monthly coaching service, and then also now get access to a training course, soon to be course(s), which you can log in and watch, read or listen, module by module.

It's SUPER simple. Even easier than WordPress, even when using something like their Divi theme which is pretty much drag and drop as that is. Yes, even easier than that.

I can sell my courses, I can keep track of everyone's progress, I can sell digital downloads - it does everything I need it to do for my coaching business.

So THAT is why I spent £5k on my website, and then didn't even use it.

I've even now migrated my own personal website across, again, from WordPress to Kajabi. It's not a membership website, but it makes it simple to keep it all in one place

Costs wise, Kajabi starts from $119 per month - which, on the face of it sounds expensive. Remember what I said when I first looked at Kajabi? I instantly canned the idea based on that cost alone.

Once I added up the cost of what I was already paying for proper web hosting, all of the WordPress plugins I was using, their maintenance and renewal fees, the cost of paying my web developer every time I wanted a small tweak to the code, or decided I wanted to do something slightly different with the website - the cost of $119 per month was actually marginally cheaper than that.

And someday I hope to be able to ditch the CRM too, that alone is $49 per month - and if that's the case then Kajabi would become vastly cheaper, by a long shot.

The CRM Isn't bad in Kajabi, it just depends on what you want to do with it. And for me, it doesn't quite do a couple of things that are specific to me around automation. But it could be ideal for you or your business.

SO, if you are interested in using Kajabi to power your online business - then you can this link to sign up for a free 14-day trial and build out your own website in a very short space of time, just like I did. Here's also a link there for Thrivecart which I'd highly recommend if you need to account for tax properly.