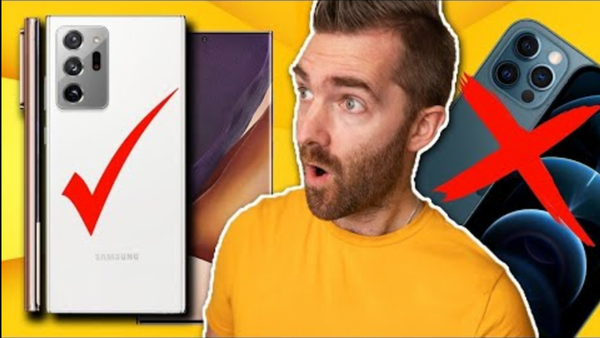 Which one is better? the iPhone, or the Samsung Galaxy Note 20 Ultra which runs Android?

If you're currently using an iPhone and wondering to yourself, is Android better than the iPhone? Or thinking about switching to the Note 20 and wondering if it's going to be an upgrade or a downgrade? Well - let us continue our important work and find out!

Hi, Welcome my name is Pete, and I basically own every Apple product under the sun and have been using Apple products exclusively for as long as I can remember. If you want to watch more of these confused Apple fanboy videos then head over to my channel and subscribe, that'd be hugely appreciated.

So in this video, we're going to cover off a few key points around what I like and dislike about switching to this phone. Shock horror, some of it, SOME of it, is actually OK! Hear me out.

First, let's talk about the good stuff, the stuff I love. Then we'll get onto the not-so-good stuff.

Let's start by talking about the screen - because it's beautiful, vibrant, and runs at 120Hz which makes it an absolute dream to use. Maybe Apple will catch up with that for their iPhone 13? Maybe? I mean, it's not like Samsung released this in August of last year...

Notifications, also - woo! For the first time, I can remember, they actually semi-worked on an Android phone. This time the badge notifications did update properly when I had new notifications, AND they disappeared after I'd been into the App to read them. But the magic with Android is that you can really customise your notifications and specify which type of notifications PER APP that you want to see.

I absolutely love that - also there's some bad stuff when it comes to notifications so more about that in a moment. But this time around I used the stock launcher and didn't go with anything like Nova launcher, which lets you really customise things, more on that soon.

For the iPhone users amongst us, and thanks to those of you who commented on my S21 video - you can add both the torch and camera buttons on the lock screen, just like you get on the iPhone which gives you instant access to both camera and torch and if you're like me fumbling around at night, that's probably one of the first things you'll want to set up.

Something we iPhone users don't get is this incredible ability to zoom right in when taking photos. Now, how useful this actually is in real life, I'm not sure given how pixellated the images turn out, but with the Note 20 you can zoom right into 50x, and when you do, you get a really handy feature that helps lock on to the object you're focusing on to help counteract any movement from your hands. Personally not something I'd use, and with this camera, you'd be best going at most 5x because that is using optical zoom with one of the lenses rather than digital zoom. Instead, take that shot at 5x zoom and then crop and edit it separately.

One to mention now that I'm getting to know the Android software when using 1Password on this phone, it works absolutely flawlessly. It works in the Chrome browser, automatically picks up and fills in all sorts of fields, and basically has zero issues, which I'm REALLY grateful for after having to re-sign into all my apps when setting up a new phone. Previously I had all sorts of problems with all different types of password managers on the other phones I've tested. They just wouldn't work in Chrome and only then would work half of the time. I think this is actually the first Android phone I've reviewed where the Password Manager actually works really well - so high five to 1Password for that.

If you're currently storing your passwords in Safari or Apple Keychain, and you need to switch from Apple to Android then you can find some discounts of up to 50% off a 1Password subscription at the bottom of this post, and that will make the transition much easier for you.

Also if you are using the Chrome password manager, please stop storing passwords there. Watch this video to find out why.

One more feature that I surprisingly LOVE about this phone, and I never thought I'd actually ever use it, is the reverse wireless charging, or as Samsung calls it, Wireless Powershare.

When enabled, this means you can charge other devices on the back of your phone. If you're anything like me and have a significant other who never remembers to charge their phone overnight, no matter how many times you remind them, and then when you're at a restaurant they run out of battery, It's really cool to be able to actually charge their phone. I think after our meal my wife's battery was up to something like 25% again, so that's really awesome.

A quick pitstop at the pen, because the Note 20 Ultra does come with a pen that slots into the bottom of the phone. You can do some fun things with it, including waving it around like Harry Potter to make your phone do certain things, but also in more useful ways like when taking photos. You can use the pen to trigger the shutter button on the camera - which makes for some great use cases when snapping family photos or selfies when you're not holding the phone out in front of you.

One thing to mention about the Note 20 Ultra is that you get something called MST support for Samsung Pay. This means that you can use your Note 20 Ultra on ANY contactless point of sale system, even those that don't work with the likes of Apple Pay. This is because it basically replicates what an actual contactless card does. Personally, that is not a huge issue here in the UK, what with the pandemic pretty much everyone now takes contactless via either Apple or Android phones - but I understand it's a bigger issue elsewhere in the world.

The battery also falls into the Good Stuff category. Considering I had the phone running as 120hz I'm quite surprised that I did get a good day's worth of battery life out of this thing. Only once or twice did I need to charge it mid-day which is no different from my iPhone 11 Pro Max. So all good stuff there.

Lastly in the good stuff, is that it would be silly to talk about Android and not talk about customisation, because this is a luxury that we iPhone users don't really have. I mean, we can customise our phones as much as we like, as long as we're within this sort of Apple walled garden. Which is good and bad.

But with Android, you can basically do anything. Any complaint that I have can probably be fixed by software of some form. I'm loving Nova launcher which lets you do actions like swiping up on an App to launch a different app, and there are other apps like Good lock which those of you commenting on my YouTube videos have told me to check out numerous times! I agree it's cool! You can get a little bit more control over your home screen, menus, navigation and notifications, and a few other areas - but basically with Android, if you can think of it, someone has probably already made an App for it already. Pretty cool.

Oh actually, one more to add on - lift to wake. It's SO nice to just lift up the phone and for the phone to unlock and go straight to the home screen without having to swipe up as you do on iPhone. Yeah, that's worth a mention.

WHAT'S NOT TO LOVE?

Good stuff is done with - now, on to the Bad stuff. Android people, please be gentle with me - I'm a newbie at this! If I've made any mistakes, comment below and I'll correct myself for the next video, so make sure you're subscribed for my apology videos, haha!

Let's talk about the size and shape now, because this is a big phone. Not quite as big as the previous generations of the Note which was more phablet than a phone, but I found that when comparing this to the S21 Ultra, the Note is just more awkward to hold. Its overall size meant that it makes it difficult to reach parts of the screen at times. For example, if you held the phone in your left hand and needed to tap the enter key on the keyboard with your left thumb - it's near on impossible to do without either dropping the phone or your palm mashing the keypad.

Also related to the screen, the fingerprint reader I found to be a bit clunky. It was slow at times, and particularly on sunny days, I found the auto-brightness adjustments just weren't that great and I'd be struggling to see the screen. This can be particularly frustrating when you're trying to see the outline of the fingerprint symbol so you can unlock your phone. Though I do have Face unlock enabled as well which did help out on a number of those occasions.

There's also No Micro SD Card support - I thought that was a thing on Android phones? But I think, literally none of the 4 or 5 phones I've tried so far, none of them have had an SD card slot. Huh.

With Notifications. Yeah, they're great. I know I'm going to see comments down below about - you idiot, you don't like notifications on Android? This guy doesn't know what he's talking about! But I've had some form of notification issue on literally every Android phone I've used so far. I must be doing something wrong, but every time I've shown someone they've kinda gone - yeah that might not work but look at this, which completely avoids the question.

This time it's particularly when I'm using the phone, my phone makes a noise, yet I have no idea what has just happened. No clue which App it came from. UNLESS I go back to the lock screen or pull down to see the notifications and then I know what's happened.

Whereas on iPhone, I get a nice bubble at the top of my screen, and I can reply to messages right there without leaving an App, or I can tap the notification to go straight into the said app.

I've checked and I have all of the right options enabled as far as I can tell, but still, nothing. Just noise and then it's up to me to go and investigate what's just come in. Really frustrating.

I think if you asked me what my favourite Android handset so far was, if I was switching away from Apple - I'd probably say to go with the OnePlus 9 Pro and not the Note 20, and you can check out links to buy both of those down below, and you can also watch my experience of trying to switch from iPhone to the OnePlus 9 Pro right here. Thanks for reading, remember to head over to my channel to subscribe and I'll see you soon!