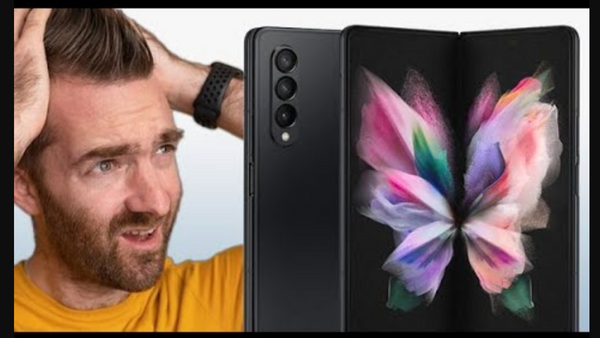 Is the Samsung Galaxy Z Fold3 really worth switching to from an iPhone?

Hi, my name is Pete, and I have been an iPhone user for way too long and own pretty much every Apple product ever made.

However, I didn't upgrade my phone last year, and I'm not sure I will this year. In my series of Lifelong iPhone user switches videos and blog posts, I find myself becoming even more interested in Android every time I pick up a new phone.

This time, it's the Galaxy Z Fold 3, and I've been using it now for about a week. I decided to try this out because I wanted to know, can I actually switch from an iPhone to one of these weird new foldable phones? Or is it just a gimmick that doesn't actually work?

So this is the Samsung Fold 3, which is their third generation of foldable smartphones.

You still get a display on the front screen, but open it up, and of course you get a beautiful large tablet like experience.

Both of these screens are 120Hz. You get a fingerprint reader on the side along with the usual face unlock. It has an under screen camera, more on that in a moment, and, whilst it doesn't come with it - you can also use this with a special fold edition pen, where the nib retracts to stop you scratching the screen.

When I ordered this phone it came with a free pack that had a charger, the case, and the pen, which conveniently fits into the case. But I'm honestly not a pen user, I never have been so it kinda just sat there most of the time not being used.

In terms of the positives around this phone, it does have plenty.

Of course, for most of the review around this phone, it is going to be about that screen and the huge 120hz display which is genuinely really great. I love what Samsung has done with this in terms of using a single app full screen allowing multi-tasking with 2 apps open side by side. This actually made a lot of the initial setup of the phone REALLY easy with say, using half the screen to keep 1Password open for quick copy and paste onto the other screen with whatever app I was setting up for the first time.

Actually, this is the second Android phone where 1Password has been pretty flawless with working - I think I'm kinda getting to know my way around Android now! Also, quick shout out to 1Password as they've recently hopped on board as a channel sponsor, so head down below for links to some discounts of up to 50% off.

I love the thought that's gone into making some apps on the Samsung Z Fold 3 make the best use of the screen real estate like when using the camera.

Speaking of the camera app, that and other apps also adapt to the half-folded mode really nicely. Where you can get to all the settings and preview images, but see the live image at the top. Over in Apps like YouTube you can be watching a video whilst independently using the lower part to scroll through comments and browse other videos.

I also love what they a TRYING to do here, with the under-screen front-facing camera. It's a little odd and the picture quality isn't the best - but it's actually quite nice when watching full-screen videos or even in some apps where you don't notice the pinhole camera or a notch. It's still early days, but it's pretty cool.

The screen also means you can have way more apps and widgets and just be able to see more stuff without having to scroll which is great.

Lastly, on the screen, I did wonder if the area where it folds would annoy me over time - but actually no. I mean, it's definitely noticeable, but in day-to-day usage, it didn't put me off one bit.

Another thing to love about the Fold and specifically Android in general, if you are thinking of switching away from Apple like me, is the pure ability to customise literally everything on this phone. If iPhone has 'an app for that' then Android has 'A setting for that'.

If you want to change the layout of your home screen with how many icons or rows, you can! You can add Widgets BUT ones you can again, customise!

You can even use different launchers like Nova launcher and many others to really customise things by swiping up on one app to launch a different app.

There is genuinely just so much you can do with these phones and I can see why the hardcore Android fans hate the iPhone due to its 'walled garden' approach of locking everything down.

But in this instance, and specifically with Fold 3, there are some drawbacks. Some significant drawbacks, in my experience.

So - here goes, and I'm already going to say sorry to those already heading down to the comments section now, I can hear you! 'Oh, he doesn't know how to use Android, what a loser' 'He's such an apple sheep'.

Yep, you're right. I have no clue what I'm doing. I'm just a boy standing in front of an Android phone, asking it to make sense...

Go easy on me, if there are fixes for my issues then let me know - and maybe we can all get educated whilst reading this? OK, let's talk about problems.

First up - Crashing apps. What the heck is with Android, or maybe it's the phone, but I'd be going about my day, using it normally, and multiple times, apps would crash on me whilst using them. No reason, no rhyme, just boom. Crash. Gone.

Fire it back up, and it carries on as if nothing happened!

It's like my 5-year-old eating all the chocolate from the fridge and then asking me if he can have some chocolate. Yes, we keep it in the fridge because that's where it should be.

Now I have no problem with the German language. I actually took German at school. Ich Haben Meinen Weimappen Veloren! Was that right?

But I DO have a problem when this phone thinks that I speak it! Twice now have I been inside an app and been unable to work out what the heck it's saying because it thinks I want to sprechen de Deutsche.

Samsung Pay - unable to get it working because even after speaking with their tech support, is buggy and needs to be fixed in a software update. Assuming that one will get fixed pretty quickly.

Samsung Health, all looks OK until you visit the Notifications section and again, I have no clue what I'm looking at!

Thirdly, I don't know if it's the under-screen camera or the software, but for me, Face Unlock was really not reliable, at all. I had to use my fingerprint more than half of the time to unlock it because it just wouldn't pick up my face, even after registering an alternative look. Oh, and also it doesn't work with Sunglasses. Kind of a pain. Does Android not do that? Does it not work with Sunglasses? 5 Points to Griffindor!

Next is one I think might be specific to me perhaps or at least the network I'm using here in the UK. It repeatedly kept losing phone signal, or having one bar and telling me it lost connection. Flicking airplane mode off and on seemed to fix it temporarily, but I definitely noticed that it would either have a weaker signal or not have a signal at all in places where normally I'd be just fine.

Now I did have a carrier update whilst using this phone, maybe that was something to try and fix the problem, but it made no difference for me. Actually speaking of which, I did also have a few issues with my wifi at home where the phone would drop off the wifi. Going into the Wifi settings and tap on the network and it would connect just fine. Again, the first time I've seen that in well, any phone that I've tested so far. So that is just a bit strange.

Next up and also one specific to this phone, I realised how important it was to be able to use the phone with one hand. Even though the phone has 2 great 120hz displays, the front single display is much narrower than any regular phone, and that means that the keyboard is also quite small. I'm okay typing on it when I focus on what I'm typing, but it's very easy to make a mistake if you aren't paying attention, and generally, it feels just awkward to use for anything more than just checking notifications and the odd quick reply to a text. Anything more than a few words and you'll want to open up to get the true fold experience, which I found just isn't always practical.

Another thing to mention, I know this just sounds like I'm bagging on the Fold 3 but - kinda is what it is, is the camera. It can and does look really great in some situations. But this photo, which I took multiple shots of, looks like it was shot on a potato.

How many generations back do we need to go with phone cameras to get bad shots like these? This was on a relatively bright afternoon so there was plenty of light, and I'm struggling to understand how it could have gone this wrong. So there's that.

Then we get onto by far the biggest issue with the Galaxy Fold 3, in my opinion, and that is the reason why it is physically impossible for me to switch to this phone over my iPhone 11 Pro Max.

This thing gets around 4 hours of screen time per day, which doesn't sound much. But I'm finding myself having to charge this phone throughout the day to make sure I don't run out of battery.

For me, this is pretty disastrous. I'm living this whole key-free life right now. No battery means no phone. No phone means no getting into my car, because that works off of an app. This means no opening the garage door and no getting into the house. So for me to be constantly worried as to whether I'll have enough battery life or otherwise be locked out of my house or car...

I just can't switch to this phone. It's just not possible.

It's a great feat of engineering. The larger, 120hz foldable screen is amazing. But I don't think it's quite ready for mass adoption just yet. At least not until the battery tech gets better, or Android gets way better at optimising the battery it does have so that it gets all-day battery life.

Much like the new Samsung Galaxy Watch 4, which I DO really like, and I'll have a review posted up on my channel soon, so make sure you're subscribed for that.

For now, it's back to the drawing board. I've also got a Galaxy Flip 3 coming soon which I'm interested in switching to and I'm hoping that one is less buggy and more practical. So for now, go fill your time in with watching me discover Android for the very, very first time, or go watch this other video that YouTube thinks you should go watch - and I'll see you in the next one.