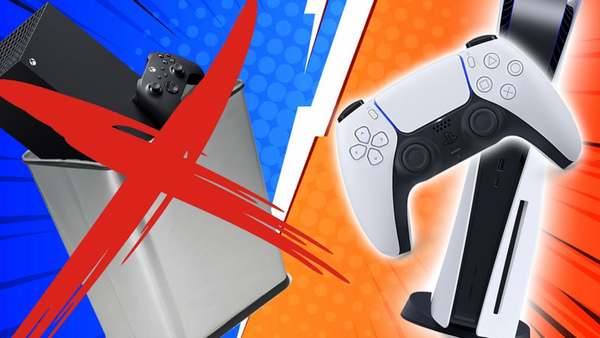 Back in 2013, I proudly bought an Xbox One on launch day and since then, for pretty much a whole decade, I've been 100% complete and utter Xbox. Recently, I was one of 'those people' who queued up and bought the Series X again on launch day, but this time in the middle of a pandemic.

But what if everything I believed was false? What if, the PS5 is actually better than the Xbox?

So for anybody else thinking of switching from Xbox to the new PS5 - today is when we find out!

Hi, my name is Pete, and on this website we help busy entrepreneurs find the best tech, be productive and stay safe online.

First up let's talk about the size of the console. Because the PS5 is pretty significantly bigger than the Xbox Series X, both of which decided this time around that they would break the tradition of making their usual shaped console and instead have this bigger, bulkier, less likely to fit in your TV cabinet shape.

Next, let's get on the console itself and talk about the UI, which looks really smart. Personally, after having an Xbox One and now a Series X, nothing has really changed for a very long time. It still looks the same, doesn't look really that attractive at all and it still looks fairly similar to the weird blocky UI that Microsoft came up with for their mobile phones from way back when. Oh, and it's also really, really busy. Like there is too much going on. I think most Xbox players just use their home screen, game pass, and quick access to settings and friends.

So coming over to the Playstation dashboard, it's a really nice change. Laid out really well, the animations are smooth and it's just really nice and responsive. Similar to Xbox, a tap of the Playstation button gives you quick access to game switching, settings, friends, audio, and all of the things that you need in a pinch.

This takes me on to graphics, which is, of course, reliant on the game developers to come out with games that show off the hardware. There have been times where I've been around friends' places and seen their PS4 or PS5 and the graphics just looked better and smoother. Now I know that could be down to the TV just as much as the Playstation, but it still felt like that regardless of whoever's house I was in.

The Xbox Series X is technically the more powerful in terms of physical hardware, but the PS5 feels like it's more consistent. No momentary slowdowns when browsing menus, no drops in framerate that I've seen so far in games, way less glitching in already horrendously buggy games like Call of Duty. But in terms of real graphics quality, they're too close to call.

On the PS5 you have games like Spiderman, Ratchet, and Clank, which have incredible graphics, through to Xboxes latest trailers for Microsoft's Flight Simulator. In terms of graphics, they are both pretty incredible consoles, and as I said before, it's down to the game developers themselves to make use of the hardware. Take a look at the recently announced Forza Horizon 5 for example, and you could easily assume that this was on the previous generation of console. Otherwise, both consoles can do 4k 120hz on some games, though at the time of making this post, there is support for many more titles on the Xbox over the PS5.

Jumping on to the Controller now and the PS5 has the new version of their trademark controller but this time with a touch bar on the top which can be used for clicking and swiping. I will say that whilst the Playstation by far has the most innovative controller between the two, I just don't find it as comfortable.

By Innovation I mean the vibration motors in the PS5 are really, REALLY great. With games like the included Astro's Playroom and some minor use on the likes of Spiderman and Ratchet and Clank, I found many other games didn't really make use of them. But then it is still early days so it'll be interesting to see what comes of them.

There's also a speaker built into the controller which whilst it's not very loud, does add for some interesting 4D use cases, specifically in Astros Playground where lots of little bots get stuck inside the controller and as you shake the controller you can feel and hear them rolling around inside. That kind of use is mind-blowing. But otherwise, I've not found any other games to make such good use of this feature yet beyond acting as another button to push.

The speakers can also be used for voice chat, which I just found too quiet unless you held the controller up to your ears, but it's convenient considering there's also a mic included on the controller, so you don't need to worry about a headset for voice chat, though you'll still want to invest in a headset if you're a hardcore gamer. That speaker can also be used to extend the 4D use case again, where things like blowing into the mic can say, spin a fan inside the game. Again, I've only come across this in Astros Playroom, but it's an interesting concept all the same.

Then we have the triggers, and the controllers have adaptive triggers which will vary the amount of pressure you need to apply which again, just add a chef's kiss to how well Sony has thought about the next level when it comes to controllers.

So with all of that, with all of the new features and design, why is it still so uncomfortable to use, when comparing to the Xbox controller?

Microsoft's design with the left d-pad and joystick positions feels so natural, yes I guess because I've been playing with that controller for the last 8 years, but also the sharp edges around the triggers and the general grip just feels, uncomfortable on the PlayStation controller.

Finally, with the little joysticks themselves I found my fingers slipping off more on Playstation than Xbox where Microsoft's have a deeper curve - definitely an innie rather than an outy, compared to Playstation who's a sort of half in half out deal.

Lastly on the controller, currently, there are no 'Pro' controller options for the Playstation, whereas, with the Xbox, you have the very expensive, but still very good Elite Controller which gives you a few features like adjustable triggers but also gives you access to 4 buttons on the back of the controller. I find these extremely useful in games like Black Ops where you can jump, reload and ping enemies without taking your fingers off the sticks, and I find myself dying on black ops far more on Playstation than I ever do on Xbox.

What I'm realising here is that it would be incredible if these 2 controllers could just become one and benefit from each other's design features. However, this is very unlikely to happen so for now I will say the stock PS5 controller is technically more advanced with some really interesting features, but the Xbox is more comfortable.

Let's talk console features now and whilst the Series X does have Quick Resume which lets you jump from game to game and pick up where you left without loading in fresh, it's sorely missing from the PS5's set of features. With that said though, the Playstation is seamless in loading games whilst playing, with the likes of Spiderman which is really clever, it transitions from playing a video cutscene right through to you taking over control and playing the game without any pause to render the environment which I found really stunning. I just wish they had Quick Resume so once I've finished a round of zombies with the squad, I can jump back to something else without any delays.

That takes us on to game selection and this is, of course, a personal opinion, for the Playstation, Spiderman Miles Morales being a launch title was very well planned, it's an incredible game. Other titles like Grand Turismo 7, still are yet to launch - whereas on Xbox you have the standard titles like Halo, Flight Simulator, and Forza Horizon. However this time around with the next-gen consoles, it's a slightly different and easier decision. Because right now, many popular online titles are cross-platform. Meaning you can still play with your friends regardless of whether they're on Playstation, Xbox, or even PC.

Though, it hasn't been smooth sailing all the time, commonly running into issues with joining the same party and particularly cross-platform voice chat can be very hit and miss, but this is something that's only going to improve over time.

One thing that is a fairly big deal to us Xbox players, is what Microsoft calls Game Pass Ultimate and it's normally £10 or so per month, but if you do some strong googling, you'll find that there's a workaround that lets you get 3 years worth of Game Pass for just $1 - and I'll link that here.

Over in Playstation land, this is kind of halfway between the PS Play subscription, which is just like your Xbox Live subscription, and PS Now, which is Sonys attempt at a game subscription slash kind of download service. For both consoles, this also works on PC, but I will say that Xbox takes the win with a better selection of games included. Particularly with EA Play recently being added to the Game Pass Ultimate subscription, with not just popular sports games like Fifa, NHL, and Madden, but also other games like Star Wars, Battlefield, Titanfall, and Need for Speed. The Game Pass Ultimate really is a subscription you could own and never have to buy another game again. Particularly with the latest announcements that latest-gen games like Forza Horizon 5, Halo Infinite, and Flight Sim are all available on launch day through Game Pass Ultimate and at no extra cost.

In comparison, Sony seems to be slightly lagging behind and doing what Microsoft was actually doing a few years ago.

With PS Plus, you get a small number of games every month - with this month being Star Wars Squadrons, Virtual Fighter 5, and Operation Tango.

Over to PS Now, you have titles like The Witcher 3, Borderlands 3, Doom, Metal Gear Solid, Last of Us, Unchartered, but for me - none of these really screamed value for the price. Again, very much a personal opinion - but I was expecting to at least see some classic Playstation games like Tekken and Ridge Racer in the library.

So whilst it will really be a personal opinion depending on the games you want to play, I just can't see how you can beat the Game Pass Ultimate right now, with high-quality launch titles like Halo and Forza coming straight to you at no additional cost, and with that handy trick, which Microsoft must definitely be aware of, meaning you can get 3 years of Game Pass Ultimate for just $1, it's a no brainer.

Overall, even with the controller not being comfortable and the game selection being a bit questionable, I'm still going to keep the PS5.

The seamless loading of games, the high-quality graphics, and just overall classy UI is simply great and makes a nice change to the Xbox. I like the game selection too.