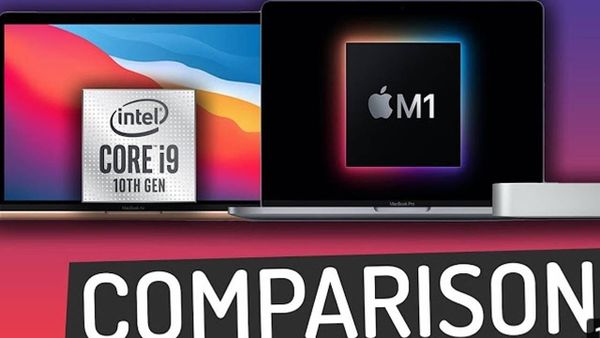 M1 MacBook air vs MacBook pro 16 – What is better? The Brand new, base model M1 MacBook Air or the 16″ Intel i9 MacBook Pro?

That’s the question we’re going to answer in this post, and if you stick around to the end then I’ll tell you what I’m going to do with my 16″ Pro…

If you have been anywhere online lately, you’ll likely know that Apple recently updated 3 of their product lines, to use their new M1 Processor. These are the MacBook Air, 13″ MacBook Pro and the Mac Mini.

What you might also have seen, is that the M1 Processor seems to be absolutely killing it, against comparisons to their previous Intel powered versions.

So today I’m doing a comparison that I’m really, really interested in and one that might just sound plain stupid to do…

Anyway, getting right into this in terms of the specs:

In the Red Corner

We have the base model 2020 MacBook Air, packing the brand new Apple Silicone M1 Processor, which they are now in the process of replacing throughout their entire product range.

Over in the Blue Corner

Over in the blue corner – we have the 2020 16″ MacBook Pro. This one is the base model, but with many upgrades. It’s got the Intel Core i9 Processor, 32Gb of Memory, 2TB of Storage, and the AMD Radeon Pro 5300M GPU. I could have spec’d this one further, to the 5600M GPU, slightly more storage, or doubling the memory to 64Gb if I wanted to.

And this thing, this BEAST, this heavyweight, and I do actually mean that because it’s massively heavy compared to the air – Comes in at a huge $3,699

But, to make this comparison fair, let’s take away the upgraded storage cost and instead price it’s base amount of 512Gb, which is still more than the MacBook Airs 256Gb Model, but brings the price down to £3,099, still £2,100 more expensive than the Air.

Either way, You’d think that this thing hasn’t got a chance in hell of competing with the beast of the 16″ MacBook Pro – right?

Actually, well, just watch, because This MacBook Air is better than the MacBook Pro – In SOME situations.

First off I’m going to run through some various benchmark tests and some real world tests, then at the end I’ll try to make sense of all of these results and give you my perspective on what’s going on.

First up is CineBench R23, which is a tool that will max out the CPU on both of these systems, and running it on both of these gives us an overall score of 6479 on the MacBook Air and 7302 on the 16″ MacBook Pro. Which gives the 16″ MacBook Pro a near 12% Lead on the MacBook Air. Kinda what you should expect when comparing machines which are over 2 grand in difference, but maybe not as big a difference as you’d have thought, right?

Now, there is an horrendous fan noise that you always get with these MacBook Pro’s. The MacBook Pro had it’s fans maxed out at 4900 RPM and it’s CPU temperature was around 86 Degrees for the majority of this test and most of the tests carried out. But on the MacBook Air, which doesn’t have any fans – it’s CPU temperature was 92 Degrees but since there are no fans, was completely silent.

I will also say that picking up the Air after these tests, it was still just warm to the touch. Compared to the MacBook Pro of being noticeably hotter! And with that MacBook Air, the temperature dropped pretty quickly from 90 down to 70 and then 60 within minutes of running those tests.

One other thing to mention here is the power consumption – In these tests, the 16″ MacBook Pro hit over 50 watts but this M1 Air was just 7.4 watts which is a whopping 148% difference.

So once you take into account their, slight difference in performance, but compare that to a huge difference in fan noise and power usage – that’s really quite something.

Over to GFX Metal to test out the game performance and the results here are as possibly expected. With the 16″ MacBook Pro and that Radeon 5300M GPU getting 88fps on one of the specific tests that we’ve picked, compared to the 70fps of the M1 MacBook Air, overall a 22% Difference.

Those are significant differences of 43% on the single core and 15% on the multi-core. I suspect the 32Gb of Memory on the Mac here took hand in that victory compared to the stock 8Gb included on the Air.

A quick stop over to disk read write speeds, and these were pretty much the same between the 2 models. Between 2000MB and 2700MB/s so no real differences there.

And whilst all these graphical tests are nice and everything, I thought I’d also try to simulate general web browsing, and used the speedometer website to see how snappy general web browsing was on each of these, and again – massive differences. The 16″ i9 MacBook Pro hit a score of 128 compared to the M1 Air’s score of 226. A huge 55% difference!

So you will definitely see much snappier general web browsing on the M1 Air compared to the i9 16″ MacBook Pro.

Over in terms of video editing and exporting I’ve done a few different things here. First up I used the BruceX benchmark which brings in a short but fairly complex 5k sequence and tested the export speeds.

The 16″ MacBook Pro took the win here with 16 seconds to complete vs the 21 seconds on the Air, a 27% difference which was once again won by the MacBook Pro, as expected due to the dedicated graphics chip.

I then tried exporting one of my usual YouTube video’s with various effects, transitions, colour grades and such, much like the one you’re watching right now, and this gave us 6 Minutes 30 for the MacBook Pro vs 9 Minutes 30 for the Air. A 37% Difference. Again – yeah, pretty much as we expected.

BUT, the last – the last test that I ran for this around editing was to grab some footage from my A7SIII Camera, which at Full 4K 10-Bit, 4 2 2 and only 25fps, gave us a different result of 14% where the MacBook air was faster at exporting than the 16″, £2000 more expensive MacBook Pro.

What does all of this mean? I mean, we’ve got a mixture of results here, for some things the MacBook Air is notably quicker, but in particular the graphics heavy work than the MacBook Pro is, with the exception of the Sony A7SIII Footage that we tested.

So my advice here would be divided depending on what your requirements are.

The key things to note here are that the MacBook Air is incredible fast, incredibly quiet and incredibly conservative on power. It comes so close to the MacBook Pro that it’s almost unbelievable that a machine that’s over £2,000 cheaper could be so close.

If you are looking to do intensive workloads on this thing and value a quiet environment, then this is a great option. I can’t tell you the number of times I’ve been in meetings and had a few things open on my Mac and been that person who's sat there with the laptop fans spinning at full speed, desperately trying to see what I can close down to keep it quiet…. it can be awful at times. If you ever want to record video’s or live stream through the 16″ Pro then again, you’ll need to hide it away somewhere because those fans will kick up really quickly.

So if you are looking for a general all round machine then the Air is a fantastic option, though I would recommend to spec this with at minimum the 16Gb of Memory, as I suspect that this would significantly affect many of the results where the Air fell short.

Pointing out the obvious, it’s a 16″ Screen, so for those of you needing a larger screen. Yep, that’s for you. For those of you who buy one to play games on, then the 16″ is still the best one for you between these 2 models…. but who am I kidding? Who buys a Mac to game on!? Hah!

For those using the Adobe Creative Cloud suite right now, their apps are NOT optimised for the M1 Mac. They’re horrendous. I took so long filming all of the benchmarks that I forgot to film the Adobe Premiere comparison, and I will just say that the MacBook Pro smashed the M1 MacBook Air – For now, until they update their apps to work natively instead of via rosetta. So stick to the Intel Mac’s for now until they’ve solved that – but in general, for those content creators who are editing video’s, then the 16″ Air will give you marginally improved performance, but again at a cost of £2k extra?

I’ll be honest, I struggle to see any real reasons why you wouldn’t go for the upgraded Air with 16GB of Memory for the price difference. That extra £2k can buy you a whole lot more stuff…

And following the recent leaks of the 2021 and 2022 line-up of Apples next gen processors, I think we’re about to see some very, VERY interesting Mac’s about to hit the market.

So if you are still really keen on a 16″ MacBook Pro, I’d just wait that little bit longer if you can…. because you just don’t know what is just around the corner.

If you liked this post then please do head over to my YouTube channel and subscribe for more Mac video’s to come. It really helps to support the channel and gets more people to see these video’s – I’m also patiently waiting on my top spec Mac Mini to be delivered, and then hopefully I can compare this to the M1 Air and the 16″ Pro, and I’ve also just had the new iPad Air turn up along with the iPad Pro, subscribe to the channel to keep a look out for that.

But for now, thanks for reading.