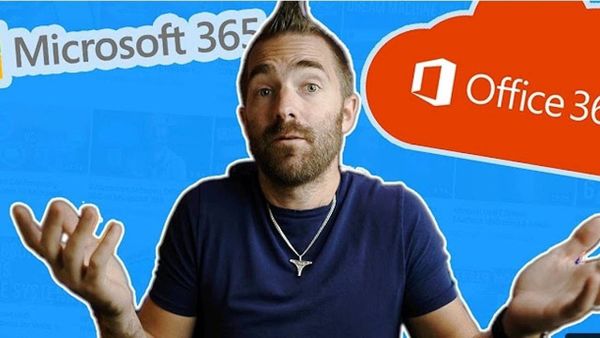 Today we are going to answer the question of what is the difference between Office 365 and Microsoft 365?

Because in April 2020, Microsoft changed it all…. again….

Office 365 is one of the most widely used platforms in business today, for those who have braved and embraced cloud computing, and well, pandemic… who hasn’t embraced it by now? Ya dinosaurs!

But, you may already be aware that I made a video about Office 365 vs Microsoft 365 on my YouTube channel, but – as Microsoft always does – they moved the goal posts. So it’s time to re-shoot another video and explain what the NEW differences between Office 365 and Microsoft 365 are all about.

Let’s get straight to work

In April 2020, the range of products and services known as Office 365 left existence. That’s right. Office 365 – is nothing! Nada. It doesn’t exist. The end.

Why did they do this I hear you ask? Personally, I think it’s a way of Microsoft consolidating a lot of their different offerings which, pretty much contained the same things in them. And also because it solves the issue that I repeatedly have when I speak to people and ask “Are you on Office 365?”

Why yes, yes of course we are! Cool – which parts are you using? Parts? Well, the office? Office 365 right? It’s the office software? You know, word, excel, outlook…

Because yes, Office 365 had much more than JUST Office. It also had cloud storage, email, collaboration, Microsoft Teams, Planner, Bookings, Meetings – and a whole lot more than I care to go through right now, because there are far too many!

First, for Home Use, you have Microsoft 365 Personal, which comes in at £59.99 / year. This gives one person all of the Office Apps, as well as OneDrive, Skype, 1TB of OneDrive and Email. For a family you can pay £79.99 and get those same things for up to 6 people at that one price. When we look at the business plans – that is where it gets rehehehearrrllly complicated!

Firstly – Microsoft 365 Apps. THIS one is the one for you if all you need is Office. You just want Word, Outlook, Excel, PowerPoint, Publisher and Access. Oh, and they’ll also throw in OneDrive too – for £7.90 per user per month.

In 365 Business Basic you get NONE of the desktop Office Apps, but you do get a cut down web version of them which, to be honest hardly anybody will use. What you do get though is Microsoft Exchange – a business class email system. 1TB of OneDrive cloud storage, Microsoft SharePoint – a document storage / collaboration / intranet / system thing… that’s a huge product in itself, and you also get Microsoft Teams – Because. Video calls anybody?

Notable missing services here are the Advanced Threat Protection, which adds an extra level of security to protect against hacks, attacks, ransomware – all of that dodgy stuff. So on this plan you will either need to subscribe to the service separately which starts at £1.51 per user per month, or look at an alternative security platform. You also miss out on some of the additional Office 365 Web Apps such as Bookings, and MileIQ which can be handy to track your business mileage, or schedule meetings without the back and forth of calendar tennis.

Up to the next level we have the Microsoft 365 Business Standard plan, at £9.40 per user per month, which is basically the same as the 365 Business Basic plan, just now you have the full Office Desktop suite of applications, and you also get back the additional apps such as Bookings and MileIQ, but you still don’t get the Advanced Threat Protection. But as a business, what you are missing out on here is the really cool stuff – which you’ll only get in the next and final plan, the Microsoft 365 Business Premium plan at £15.10 per user per month. With this you get everything that we’ve already mentioned, but you get some insanely great ways to monitor, manage and secure your business. Advanced threat protection is included, which adds that extra layer of security around targeted attacks, hacks, phishing, ransomware and many other risks we see day in and day out – though how good the protection is to you will be fairly subjective depending on who you speak to. Personally I favour the likes of Mimecast’s email protection service as I found it to be more reliable – but potatoes tomatoes.

And on to the clever stuff. The stuff that is really worth upgrading to the 365 Business Premium plan for. With Microsoft 365 Business Premium, you get their advanced management solutions – which will allow you to configure and deploy security settings, updates, patches, even whole applications – 100% remotely and from anywhere in the world. You can apply security policies to protect your business devices and stop people getting in and changing settings they shouldn’t do – basically the old version of Group Policy for you techies amongst us.

And the really cool thing – Autopilot. Using Autopilot, you can ship a new computer straight to your staff, all they need to do is unbox the thing, switch it on, sign in using their company account, and the machine will hook itself into Microsoft 365 and basically configure itself, deploy all of the applications you need and basically save you a tonne of time setting up new computers. Of course – it doesn’t hugely help if you have a lot of data to migrate, but given the current situation many of us are in with home working, it does mean you can just ship a new laptop out to your staff and providing they have a reasonable internet connection – be up and running relatively quickly. This is basically the plan to go for if you no longer have a server in your offices. Because the services in this plan will replace all of the missing features you will have from ditching a service – Centralised logons, Group Policy, and overall control of your network.

And those are the differences between the Not Office 365, because that doesn’t exist anymore – and Microsoft 365, which is the new name for everything when it comes to Microsoft Cloud services. It’s actually pretty simple. If you just want office, get 365 Apps for £7.90. If you don’t need the apps but want email, storage and Microsoft Teams then go for Basic at £3.80 If you want all of that but all the Office Apps too then it’s Business Standard at £9.40

Or if you have a bigger business, are either getting rid of, or have already gotten rid of a big, expensive, noisy server from your own offices, then Business Premium is the one to go for at £15.10.

I’d highly recommend watching this video about backing up your Office 365 Data. It’s still very much valid today. If you are using Office 365 then your data is NOT being backed up by Microsoft. So please take note of that. Otherwise, thank you kindly for your time – I hope that answered your questions on what Office or Microsoft 365 exactly is!