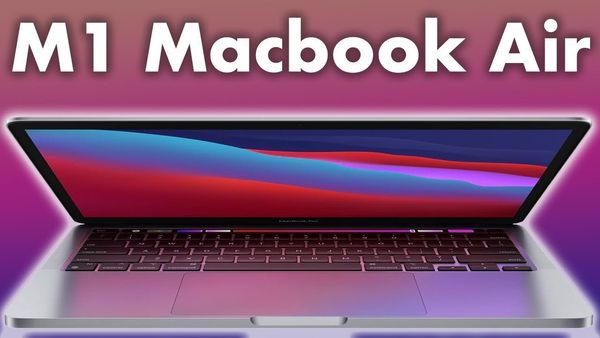 Should you get the base spec Apple M1 MacBook Air or the Top Spec?

Have you been looking at all of these new M1 Macbook’s that have been released and wondering which one you should be getting? Particularly with the Macbook Air Range – and perhaps wondering if just the base spec Macbook Air would do you? Or, do you need to move up to the next level and get the higher spec M1 Macbook Air with the extra GPU core, memory and storage?

Well I have both of them right here, so we’re going to help you spend your money wisely and show you which one is the best one for you.

First up, hi my name is Pete Matheson. If you head over to my Youtube channel you can find video’s around tech, business and a bit of finance. If you do, please consider subscribing for more.

You’ve seen all of the rumours doing the rounds online that the new M1 Apple Silicone mac’s are absolutely killing it, when you compare them to the Intel generation of machines.

Perhaps you’ve settled on getting the Macbook Air, like I did – because the performance differences between all of them are so very small, but you’re not sure whether you should be going for just the base spec, or the next step up.

Well, I now own both the base and the top spec M1 Macbook Air. I also have the top spec M1 Mac Mini and there are a couple of video’s which I’ll link below where I’ve compared and benchmarked these to the likes of the 16″ i9 Macbook Pro and the Intel i5 Mac Mini.

If you stick around until the end, I’ll tell you some of the best features I absolutely love about the M1 Macbook Air and reasons why I think you should be getting this as your next Mac. Let us know in the comments which one you’ll be rooting for. Let’s dig into the testing!

In the Red corner we have the base model Macbook Air, packing the brand new Apple Silicone M1 Processor, 256Gb of Storage, 8GB of Memory, and of course its typical small, light and completely fanless design. This model comes in at 999 Dollars, Pounds – whatever.

I’m going to run through various benchmark tests and some real world tests, then at the end I’ll wrap up the results and figure out which one you should be going for.

First up is CineBench R23, which is a tool that will max out the CPU on both of these systems. Running it on both of these gives us an overall score of 6479 on the Base Spec, Macbook Air and 7219 on the upgraded model, which is a fairly big difference right there. Interesting.

Over to GFX Metal to test out the game performance and the results here are 70fps on the base spec M1 Macbook Air and 81 on the upgraded spec. That 1 extra GPU core seems to give you an extra 11fps on the base. Not too shabby.

Over to the GPU tests in Geekbench and we scored 17040 on the base spec, and 18821 on the higher spec model. Still a far comparison to the 27546 that we saw on the 16″ Macbook Pro with the dedicated graphics chip.

Again, whilst all these graphical tests are nice, it’s good to get some real world use case tests. So we’re running speedometer to see how snappy general web browsing was on each of these. The base M1 Air scores 226, with the upgraded model weirdly scoring 216…

Over in terms of video editing we first run the BruceX benchmark for a fairly complex 5k sequence and tested the export speeds.

The base spec M1 Air did this in 21 seconds, whereas the higher spec M1 Air exported in just 11 seconds. Wow!

I then tried exporting one of my usual YouTube video’s with various effects, transitions, colour grades and such. This gave us 9 Minutes 30 for the base spec Air and 7 minutes 50 for the higher spec model.

The last test that I ran for this around editing was to grab some footage from my A7SIII Camera, which is notorious for not editing smoothly on Intel chipsets but works very well on these M1 Macs. The footage was all shot in XAVC-S, at 4K 10-Bit, 4 2 2 and only 25fps and stupidly I didn’t note down the times they ran in. Instead I’m going to look at the footage and say that the Base spec did it in this! And the higher spec did it in this!

Isn’t that just incredible? I just never would have guessed those would be the results. Unbelievable!

What I will say around this though, is that on the upgraded spec Air, the footage was like butter. Super smooth playback, with no skips or jumps, it just worked.

Whereas on the base spec Air, it definitely didn’t perform as well.

That’s all the video stuff, on to one final test to wrap this whole thing up and that is audio editing. Specifically using Logic Pro, of which it has been quite a few years since when I last dug into this one. Someone in the comments on my last video about the 16″ Macbook Pro comparison asked if I could run this comparison – but unfortunately I don’t have my 16″ Macbook pro anymore, because I sold it, because it was slow compared to this.

That person has sent me a demo file which I’ll open up within Logic Pro and see how it gets on with general playback. It’s absolutely fine on both the base spec and the higher Macbook Air. But to be honest, the track I used didn’t seem half as complicated as those I’ve used previously in my years of band stuff.

Therefore I looked for a Logic Pro benchmark test and found a forum post on LogicProHelp.com with a test that loops over 100 tracks. First we had to go into the settings to make sure it was using all of the CPU cores available to it, and increase the buffer size then we ran these tests.

On the Base Spec Macbook Air and the higher spec Macbook Air with the 16Gb of memory and the extra GPU Cores, we managed a total of 100 tracks, comfortably without it crashing. We managed to get it over 100, right up to 107 before it crashed the playback.

In summary, before we get to talking about my favourite things about the M1 Air, the base spec is basically going to be fine for most people. When I say most people, I mean those who want to web browse, study and do homework, college or uni work. Some light video editing, watching Netflix or all sorts of normal stuff.

The reasons you’d want to upgrade to the higher spec model, in my opinion, is if you are working with those notoriously difficult file formats for say, the Sony A7SIII footage where the extra memory and GPU core will be noticeable when doing some in depth video edits. Also when you are really pushing the limits in terms of having a lot of applications open all at the same time, kinda like I do. You know, 25 browser tabs, calendar, email client, messaging, whatsapp, slack, tasks, note taking. That’s heading into the higher spec Macbook Air territory.

The base spec will cope, but it will handle it much better on the higher spec.

My recommendation is to go for the base spec, unless you really have a reason to upgrade to the extra graphics core. Then you can just add storage or memory as you need. Personal opinion, I would always upgrade the memory if you can afford to, because with these models, it’s not something you can upgrade later on. You kinda want to get that right now, and it’ll be more valuable in a few years time if you wanted to sell it on.

WHY YOU SHOULD SERIOUSLY CONSIDER BUYING THIS MACBOOK AIR

With that said, let’s move on to the reasons why you should be considering this Macbook Air over the Macbook Pro or any, and I mean any of the Intel Mac versions.

Fan Noise. After using the Macbook Pro for the last decade, it’s an absolute dream to use something that makes zero noise. This thing doesn’t even have an internal fan so it is physically impossible for it to get noisy. I lost count of the number of times that I would be doing something on my Macbook Pro that wasn’t even that taxing, like on a video call. Apparently that’s taxing enough to make the fans ramp up to maximum speed, so you’re then having to fight over the noise of the fans when on a call.

For live streaming video onto platforms like YouTube, it was just impossible. I’ve heard good things about the M1 Macbook Pro in terms of fan noise, but I just like knowing that it is physically impossible for this to have any fan noise, because it doesn’t have a fan!

Power consumption. This thing is incredibly efficient. It has nearly double the battery life of an iPad Air. Which is again, a good reason to buy this over an iPad if you are travelling, because you’ll get so much more out of it. Even when using around the home, I know that when I pick up my Mac, chances are it’ll have plenty of battery life for me to do what I need to do.

Size. Yes having a 16″ Macbook Pro is great with a bigger screen, but this thing is incredibly light, incredibly portable, and the weight difference between this and the M1 Pro or 16″ Pro is significant enough to notice.

No touch bar. Love it or hate it, I’ve had the touch bar on my 16″ Pro for a few years now, and it’s refreshing to go back to actual buttons to change the volume, screen brightness and all the other bits. I don’t miss the touch bar at all.

Price. For the amount of processing power and speed, this thing is so cheap when you compare it to the similar performance that you’ll get from spending thousands of pounds more on something like a 16″ Macbook Pro.

If you’re debating on whether you should get one, in my opinion – you should. The M1 Macbook Air’s are what I think all of us hoped the Macbook Air would one day become. Powerful, Affordable machines. Not their previous generations which, I mean, come on – everyone knew that you were paying a fairly high ticket price for a pretty low spec laptop. Just because it was so light and thin. But now, you’re paying a good price, for a really, really good machine.

Please do head over to my YouTube channel for more video’s. Click join to become a member, give the video a thumbs up if you did, hit the notification bell to be notified when new video’s are posted. If you didn’t, let me know how I can make you feel better by leaving a comment down below.

With that said, If you liked this post then why not check the videos below including one where I did a full comparison to my £4,000, 16″ Macbook Pro. Or the one which talks about the best Online Cloud Storage provider for 2021.

Otherwise, thanks for reading.