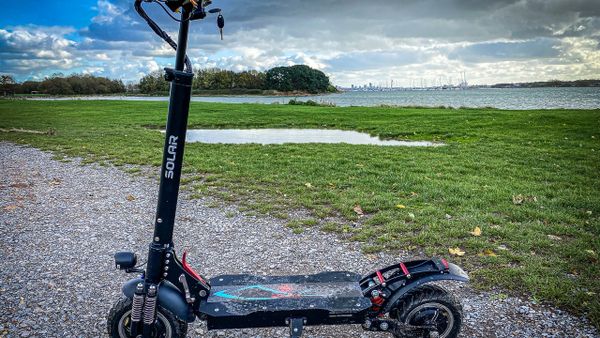 The Solar P1 Electric Scooter is a 40Mph beast of an electric scooter, and I had such a good time trying this out.

The Solar P1 Electric Scooter is a 40Mph beast of an electric scooter, and I had such a good time trying this out.

Firstly, use this link (affiliated) to get 5% off your purchase!

There's one possibly obvious thing to mention here before we get started and that is that at the time of writing this post and filming my review video below, it is currently against the law to ride electric scooters on public roads, pavements, and cycle lanes in the UK. It does seem that this may change soon as trials are being rolled out, but for now, you can’t ride them on roads. You also don’t need insurance or a license to ride one.

Firstly, it is huge. There was me thinking that an electric scooter would be small, but this thing is ginormous. Which is both good and bad. The Scooter is solid which means that it is stable to ride, but it also means that due to its size and weight, it was pretty awkward to fit into the boot of my car. Probably less of an issue with a hatchback, but in a Tesla Model 3 it only JUST fits. Perhaps most people wouldn’t need this to fit in their car as they’d just ride it from their house to wherever they need to go.

Also worth noting is that you could easily secure this with a bike lock if you did want to pop to the shops. If I was nitpicking, we sometimes struggled to push the locking lever in place on our own due to the size and weight. It needed a fair bit of force pushing against it to allow the lever to clip in and usually resulted in us kicking the lever. Equally, it’s kind of reassuring that once it’s in and the scooter isn’t going to come apart easily.

At 1200w single motor and 2400w dual motor, the scooter is super quick. With essentially a gear button to use one or both, this thing moves. I would say that this scooter is most definitely more of a vehicle than a toy. I can actually understand why these electric scooters are currently banned because they are basically a very fast moped. In fact, you can actually get a seat that attaches to it, but you don’t need a license and don’t have to wear a helmet. Though technically you should definitely wear a helmet and probably a crash suit as well… haha!

Putting aside those concerns, we were comfortably going 35mph, on solid concrete and it felt super stable. Due to the size and weight, I didn’t have any concerns about falling off. Though I did experience some sketchy moments when riding on gravel and wet or muddy grass. Back to this being more of a vehicle than a toy. It also has a brake light and a front light that was unexpected, but again if you think about this being used to commute to work on roads/cycle paths and such soon when legal, this makes perfect sense. No indicators though – is that a thing? Maybe you just put your hand out like on a bike? Fun fact, it’s pretty hard to do that… yeah!

The brakes on the scooter are very good. So good that it does make you lurch forward when braking hard.  You need to make sure you’re leaning back when you brake to absorb the deceleration – minor point but it caught me out a couple of times.

I felt super stable but it did take some time to get used to turning, and I’m still not all the way there yet. Much like when I first got on my Electric Skateboard, it’s just finding your feet and figuring out the leans and such. Plus, if you are using this thing to commute to work in the future, then you won’t really need to be pulling off 180 degrees or even 90 degree turns so that will become less of an issue. There are also shock absorbers which make riding that little bit more comfortable, though on the gravel I still felt an awful lot of the bumpy ground.

Getting opinions on this from a few different people I know was interesting. The scooter currently costs £1,199. On their website, they are offering a discount right now so that brings it to around £880 which isn’t that bad for something that you could easily use to get to work and back. But with the law, as it is here in the UK right now, most people said that for £900 it’s probably a bit too expensive, especially for something that you can’t actually ride in most public places. At £500 it would be more worth it as a bit of fun and more of a toy. But that’s not what I think this thing is, it’s not a toy. It’s a method of transport – a very fun one at that. So, pricing will be subjective depending on who you are.

Overall, my take on the P1 is that it genuinely is a good scooter. I mean – I honestly don’t have a huge amount to compare it to. Other than some electric scooters which I rode in Paris which felt really basic, tacky, and unstable. But this one feels solid. The battery range you get is 30 miles for a full charge, and the immense speed on these things make it just so fun to ride on. For or a first-time rider, I felt safe, and in control, and with no issues around the build quality other than just the bulkiness of it to fit into your car.

Most people would probably use it straight from their house to get to maybe the local shops or commute to work, so perhaps that’s a moot point.

The question, certainly for us here in the UK really is – without this being UK legal, Is it worth nearly £900 for something that you can’t yet ride in public?