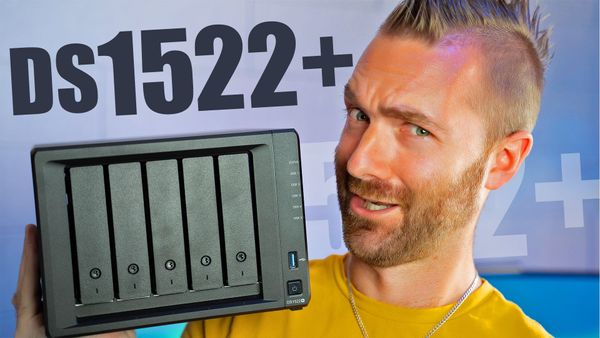 With over 17TB of data, plus One Mac Mini, One Mac Studio, two Macbook Airs, and a multitude of iPhone and Android phones - it’s got the stage where I really need to get a handle on my data management.

Synology have just launched the DS1522+ which retails for around £685, and this thing might just be the answer to all of my data storage issues.

The DS1522+ can be used as a Time Machine, which takes care of most of my home computers. Mac Studio, Mac mini and multiple MacBook Airs around the house.

This is such a simple process, simply create the folder on the Synology (which you do using the really straightforward web interface), then hop over to your Mac and head into the Time Machine preferences, select the disk, and then let it do its thing.

You can also use the built-in Windows Backup to back up your Windows PC, or even use third-party tools like Acronis Cyber Protect to back up to your NAS instead of the cloud.

Google Drive is next on my list, because I want a backup of my Google Drive onto my NAS and make it easier to upload footage to my Google drive.

Simply install the Cloud Sync tool on your Synology by going to Package Center, search for Cloud Sync and click Install.

Once it’s installed, follow the prompts to connect this to your Google Drive (or a multitude of other cloud storage providers)

Dragging my footage over to the NAS drive skips my Mac entirely and means that I can get on with whatever I’m doing on my Mac whilst I let the NAS just chug away and upload whatever needs to be uploaded.

The next one is Media, and there are 3 parts to this.

I’m not planning on streaming Plex directly off of this NAS as it’s better for me to run the Plex application on my M1 Mac Mini, so I’m just using the NAS as storage here.

To do this, you just install the Synology Photos App on your Apple or Android phone, install Synology Photos on the NAS, grant a few permissions, and now I can use this NAS to back up all of the photos and videos from my various phones.

Backing up the Backup?

That’s an awful lot of data to have sat on one NAS, even though it can survive when a disk fails.

Let me introduce you to a term that’s used in the backup world, called 3-2-1.

Always have 3 copies of your data, in 2 different locations, and at least one of those kept in another location.

It’s a pretty simple statement that means that regardless of what happens to you or your data, there will be a surviving copy somewhere.

To do this, Synology has its C2 Cloud Backup service, which lets you back up everything from the NAS to Synology’s own Cloud Storage service.

Again, it’s easy to Install their Hyper Backup application, create a new job and tell it what you want it to back up and how often and away it goes.

At this stage, I could also take it a ridiculous step further and plug in a USB Drive to the back of the Synology and backup the backup of my backup. (But that would be overkill!)

One thing that has been a pain to do in other places is to securely share NAS data online.

For me, this means giving access to my whole archive of videos to my video editor, so if we need any footage from an old video, he can just hop on here, see the entire library, and grab the footage he needs.

And doing this with Synology has been as easy as sharing something on my Google Drive.

Simply right-click, share, set the permissions and send the link to my editor. Super easy!

It’s also secure; everything is encrypted. And I feel like a broken record here, but it’s simple and it just works.

I’m lucky enough to have a 150Mb upload connection here, so when anyone does grab files from my NAS, it doesn’t take them too long to download them. But otherwise, you will be limited by your Internet connection upload speed.

How fast can it transfer data?

I was very keen to get the 10Gb adapter, plus ensuring I had all disk drives populated, so I could test the real-world performance of what this thing is capable of.

I also bought a 10Gb Ethernet switch, which gives me 4 ports of 10Gb so that I can connect this to my Mac Studio.

So just to remind you, I have 5x 4TB Drives installed in here, configured with Synology Hybrid RAID, PLUS I have 2x 400GB SSD’s installed acting as both a Read-Write cache, which gives me almost 400GB of SSD Cache.

The Cache will make a difference because when you are uploading data to the NAS, it will write the files to the faster SSD Cache first and then write them to the ‘slower disks’.

In my tests, uploading a large video File to the NAS gave me transfer speeds of between 450MB/s to 750MB/s which is equivalent to 3.6 to 6 Gigabits. So absolutely smashing past the 1Gb speeds that a normal wired connection would do.

Which absolutely confirms to me that if you plan on transferring large amounts of data between your devices, then investing in the 10Gb adapter for the NAS, your Computer and perhaps a switch in between is well worth it.

You can, of course, do some magic jiggery pokery by combining the 1Gb network adapters, (which also needs to be supported by the switches you have) but that all gets complicated very quickly.

So for most people - just grab the 10Gb adapter and keep it simple.

It also means that your Time machine backups on any wired machines will be far quicker, so if you can stretch to the extra for the 10Gb module, then I’d highly recommend it.

You can buy just the enclosure for £685 currently on Amazon here in the UK, and you can also purchase pre-made bundles, which include disks if you want to do that.

Before using your own disks though, I would recommend taking a look at the Compatibility page on Synology’s website to be sure that the disks are officially supported, otherwise Synology won’t provide any technical support for you if you run into any issues.

I have been very impressed with Synology’s own-brand disks so far. They’re quiet and fast, but they are expensive in comparison with other compatible drives.

I have 5x 16TB Seagate Exo’s drives in another NAS (which unfortunately aren’t on the compatibility list), but they are much cheaper (but also a lot louder than the Synology disks!)

The Synology drives also state that they have better consistent performance, have integrated firmware updates built into the Synology DSM Software, AND have a 5-year warranty.

So whilst they cost more money, if you have the budget to buy Synology disks, then they’re worth considering.

There’s a vast repository of apps which you can install (like the App store for your phone), where you can find apps to backup your Google Workspace, Microsoft 365, install Anti-virus, there’s universal sign-on provided by C2 Identity, and if you scroll to the bottom, there are even third-party apps from the likes of iDrive and Mega.

For me, it works well and does everything I need it to do.

I’m not running Plex from this device locally, which I’ve heard can struggle with some 4K media formats, but since my Mac mini is doing all of those transcoding tasks, that’s not an issue for me.

I finally have a NAS solution that works, is fast, and actually backs up everything I need it to.