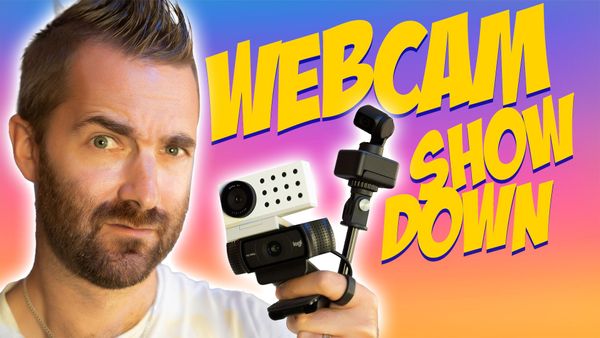 The Best Webcam in 2022! The Ultimate Quality!

While using my $750 Sony Camera for video calls looks excellent, having a $750 camera permanently sat on top of my screen is not at all practical. So, over the past 6 months, I've spent hundreds of dollars trying to find a webcam that can get as close as possible to the same quality of my Sony cam, but for a more modest price! And, I think I’ve found one!

THIS is the quality I'm trying to beat…

…but instead of this megabucks mirrorless camera (that needs manually switching on each time and is pretty darn complicated to use), we need an actual webcam that's always on, has simpler controls and is way more user-friendly than the Sony I have been using!

The Logitech C920 is supposed to be really good. Everyone and their mums seems to have one of these. That’s probably because you can pick one up for around 80 bucks. Now, these things are supposed to be really good but, I can tell you, the video quality SUCKS and the audio quality is awful. It honestly sounds like you’re stuck in a diving bell from the 19th Century. Yeah, ok, they’re great if you’re on a budget… as long as you like blue!

It’s the Opal C1, comes in at £300, and is marketed as the ‘First Professional Webcam’. It certainly looked like it was going to fit the bill for my needs with quotes from Opal like, ‘DSLR quality on a webcam for the first time’ and ‘image quality you’ve never seen in a webcam before’. So I was hyped up to give this a try.

It came through my door a couple of months ago and I’ve been using it regularly ever since. But I quickly realised that the Opal C1 is still very, very much in Beta.

There are some pretty cool features included in the software: the ability to lock focus, blur out the background, overlay text and logos, track your movement, add effects, and control things like exposure and contrast BUT, unfortunately this $300 webcam falls hard at the first hurdle. It just can’t seem to be able to keep me in focus, which is pretty terrible considering that’s a webcam’s most important job!

It is also single-handedly responsible for keeping my studio at an average temperature of SURFACEOFTHESUN°C. This thing gets HOT and radiates its heat out with the ferocity of a solar flare on a mission to engulf the world! In all seriousness though, I clocked temperatures up to 42.7°C. The Opal C1 clearly works very hard to put out seriously sub-par image quality.

I actually got to the stage where I’d unplug this from my machine between uses, just to avoid having this white-hot webcam attached to my screen permanently.

It does however have a magnetically attached cover for when you're not using it, which is a nice little addition. But I was a little disappointed that there was nowhere to store the cover whilst using it. I was expecting to be able to magnetically snap it to the top or side of the camera instead of having yet another lens cap cluttering up my desk. I realise that this might seem quite minor but, for $300, you’d expect a certain level of attention to detail factored into the design.

The audio was also not the best, and I had several comments whilst on video calls to switch back to my standard audio setup: admittedly this is the Scarlett Solo and the Sure SM7B, which is obviously a pretty unfair comparison, but the audio quality issue was not something I expected from a $300 camera. To be fair to Opal, they regularly push out updates to try to improve many of the issues I've been experiencing, and they offered me a full refund. But for me, it's definitely not going to replace my Sony Camera.

At this stage, I'd pretty much given up since there weren't any other options other than cameras like the Logitech Brio, Elgato's Facecam and others that, to be honest, didn't look like they'd be any better than what I already had in the Opal C1.

That was until a few weeks ago when Insta360 released their own take on a professional quality webcam.

Introducing the Insta360 Link! Which looks like someone took a DJI drone’s camera on a gimbal and mounted it onto your screen. And much like the Opal C1, I saw a tonne of YouTubers upload their videos about how amazing this camera was. But I didn't want to drop another $300+ on yet another webcam full of empty promises. So instead, I actually reached out to Insta360 in the hope that they would consider sending me one out to review. And I'm forever grateful that they did; otherwise, I would have been left thinking that a good webcam was just a fantasy!

The Insta360 Link IS everything that is promised. I've been genuinely impressed by it and have been using it daily for the last few weeks. It's smaller than the Opal C1; it doesn't constantly overheat; it lights up when it's in use and it switches off and points the lens towards the ground when it's not in use. So we're off to a really promising start!

The video quality is very, very impressive. It works up to 4K Resolution, which, visually, is very close to my Sony camera, and even when you drop it down to 1080 or 720p, which is what most webcam services like Zoom or Google Meet use, it's absolutely the best I've seen so far. There are zero focus issues, and I mean zero. It focuses quickly and accurately, and there's even a minimum focus distance of just 4 inches, so you can hold items right up close to the camera, and it will nail the focus every time.

The audio on the Insta360 is also fantastic. I've yet to have a single complaint when using the built-in mic on this camera. There are onboard noise cancellation features here, which have held out pretty well with my kids screaming in the background whilst I've been on a few video calls.

And then there's the software experience, which is similar to the Opal C1's features, but overall it feels way more polished and not at all that beta experience I had with the Opal. You've got manual control of the camera, which can almost do a full 360 degree rotation. And FYI, you can also double tap the front of the camera to have it swing around and centre itself. There's a whole section for tweaking the exposure, the white balance, brightness and contrast, and all the good stuff.

And then we come to the more intelligent features, which for the most part, work really well. The hand gestures, although they do feel a bit gimmicky, are actually quite practical.

Holding your palm up activates auto-tracking, which will follow you as you move around the room pretty well. I've had a few situations where it will lose me if I move too quickly - but honestly, that's only been when I've been trying to push its limits. There's also an AI zoom feature that works well here to stay zoomed to keep your head, half body or whole body in shot, and whilst I don't have enough space to test the whole body, it does a good job tracking my face all the way until I leave my room. There are also features to zoom using gestures and one more that is incredibly clever and will find and focus on a whiteboard, to let you share or draw on. In the box, you get 4 stickers that you can attach to the four corners, and then simply throwing a V up in the air will tell the Link to start searching for the board, and when it finds it, it will instantly zoom in to fill the screen. It's something that I can see being incredibly useful for those who teach and use physical whiteboards.

Whilst I probably won’t ever find a use for the last feature, what I might find a good use for is their overhead and desk view modes. Now the mileage you get from these will depend on your camera's placement and the screen's angle. The desk view does what it says on the tin and will point down towards your desk, and the overhead view is meant to be used with a separate stand for some proper top-down shots - there's a 1/4" thread on the bottom so you can mount this thing to pretty much any tripod stand.

And, if you're interested, go check out my review of the Synology DS1522+ for an answer to your backup and storage needs!