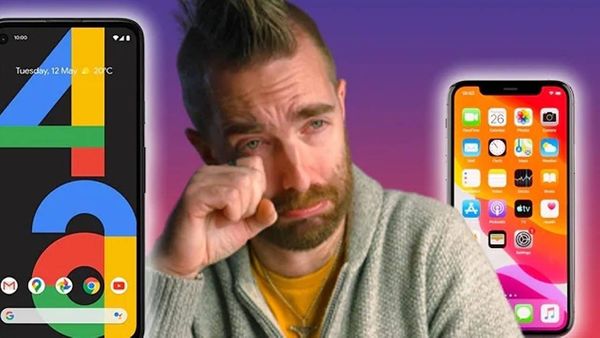 Lifelong iPhone User Switches to the Google Pixel 4a

Which one is better? The iPhone or the Google Pixel thing that runs Android? Are you currently using an iPhone and asking yourself that same question; Is Android Better than iPhone?

Welcome! My name is Pete Matheson, and from the outside I am pretty much what looks like a typical Apple fanboy. That’s not 100% true, but it’s not far off.

If you’re new around here and this is your first time read, hey. Thank you. Check out the video for this post if you want to see more videos around tech, money or business stuff. Just click and subscribe down below on the vide, it’s massively appreciated.

Whilst I don’t really feel like an Apple fanboy, I have definitely bought into the whole ecosystem. The fact I can pick up any device and have my documents, messages, photos, settings and even things like a seamless audio switching experience when you put down one device and pick up another. Or the out of the box global copy and paste which lets you copy some text or a phone number on your desktop and then paste it onto your phone . Those features all together are just great.

But for me it’s got to the stage where I’m so deeply and significantly financially invested into the Apple ecosystem that it makes me question whether there are other things out there, that perhaps could be better.

Why Am I Considering a Change?

A couple of years back I actually ordered a Google Pixel 3. But then cancelled it around a week before it shipped because I couldn’t wrap my head around how pretty much my whole world would need to change to bring this new thing, this new device, into the family.

Now though, we’re in 2021, a new year. We’re locked up at home. I’ve sold my business. Life is totally different now.

I’ve already gone a little crazy because once I sold my business which was living in Microsoft land for the best part of a decade, I switched all my email and documents and everything over to Google GSuite, or rather Workspace, or rather, whatever they want to call it today because they like to just  screw around with everybody by changing things from time to time.

So I ordered the Google Pixel 4a. It’s not a flagship phone by any stretch, not really – but this is an affordable entry for me into the world of ‘Not Apple’. I’ve been using this for a couple of weeks now as my daily driver phone, and I wanted to give you my thoughts from the perspective of someone who’s been using only Apple for the last Decade.

Firstly a quick bit of background and some perspective. I generally have an eclectic taste for anything. Be that IT or not, like music or life experiences, not that we have any of those nowadays! What I mean is that I like to try different things. I’m not the type of person who will just stick with something for convenience.

Just ask my wife! Though, ah wait, that actually came off wrong… she’ll understand! I hope?

I change things so often it’s unreal. I always want to make things better so if there is something out there that can do something better than the one I’ve got, I want it.

This still really isn’t painting a good picture for my wife is it? Shit.

I’ve used Windows and Mac for the last decade. I still have a Windows PC right under the desk I use, err, sometimes. Personal opinion but I prefer Mac over PC. Buuut there’s a whole other argument that I won’t start just now. I’ll already have the Apple vs Android police after me after this I’m sure!

With Apple, I pretty much have every device they’ve ever made. I mean literally. Every. Single. Device.

If you want to see me talk about all of their latest, every single devices, then you can check out a few video’s which will be linked down below. The videos are for their new M1 range of Macs, which I will say are AWESOME.

First up is Notifications. I absolutely LOVE the fact that you can customise notifications to a point that just isn’t possible on iOS. Using WhatsApp for example, you can go in and configure group notifications, messages, alerts, media and so much more. For Instagram you can pretty much turn off alerts for every specific thing that happens on Instagram.

I genuinely love this feature, as it’s such a distraction with all of the notifications you get today. I’m definitely someone who will go in and switch off anything unnecessary.

A really silly feature, but I love the animated backgrounds too. A friend of mine put me onto this app called BETTA which comes with a free background with a fish, and it just looks stunning.

Speaking of the screen, it’s always on display which means ZERO reaching out to tap the screen to check the time, or check notifications. It’s all right there for you, always on, without any noticeable effects on battery life which is great. Though I would quite like to customise it a bit more, but it seems on the Pixel 4a at least it’s fairly limited.

The sheer amount of customisation you can do on Android is almost limitless. I haven’t really gotten into it just yet because I wanted to test out the software as it comes, but whenever I have come up against a dislike, the answer has always been, well you can fix that by installing… or configuring … there is always a fix!

Other niggles I’ve experienced are a pretty slow and sluggish camera compared to the iPhone 11. Again, probably a hardware thing.

No quick ability to get to the torch which on the iPhone is conveniently down the bottom as soon as you pick it up. Though again, that can probably be fixed by downloading something.

I also struggled with something I often used on the iPhone which was tapping at the top of the screen to scroll your way right back to the top of the page. It works in pretty much every app. On Android I’ve noticed that the apps themselves have this baked into their app rather than at the OS Level. On Facebook you tap the Home button, which is now at the top of the screen rather than the bottom on iPhone, weirdly. On Instagram you tap the logo which scrolls to the top. But on google there isn’t any way to jump to the top of the page. Actually, even after some googling it doesn’t seem that this is a feature which can be added or fixed with software.

Swiping in from the edges also gave me different results in different apps. On the iPhone it would let you swipe in or out menus or app features. Whereas on android it sometimes goes forwards and back a page. Sometimes it even takes you back to the home screen and sometimes it interacts with the app and brings in or out menus. Weird.

A personal bug bear of mine is that it asks you what version of GSuite licenses you are using, and it doesn’t even have their Google Workspace licenses named! Kinda hard to keep up when you keep changing the names of your products hey? Well, I filled out both of the forms and have yet to hear anything back so, yeah – that’s a hard pass from me.

Next would be the whole FaceID vs Fingerprint, but again – that’s all hardware related and in some cases I found fingerprint so much easier because if you’re wearing a mask (there’s a phrase that most people would never have thought you’d be saying), it does make things easier.

I guess the only real issue I’ve experienced here is that when I go to pick up my iPhone now it just feels huge. Remember when phablets was a thing? Yeah, this thing is a phablet for sure!

But other than all of those comments , most of which can be fixed by software or buying a better phone, I don’t really have any real complaints?

It takes some time to get used to the interface for sure, but I would think most people could just pick up a Google Pixel, follow the prompts when you first switch it on and be away with it.

If you want to customise, then you can. But if not then the stock experience out of the box is still pretty great.

Well – I have to say, I am very, very impressed.

I always had this impression that android phones were slow, buggy and nowhere near the quality or standard of the iPhones. With that said, it does open up a lot of questions for me now. Like how does an android watch compare to the Apple watch?

Right now with the iPhone 11 Pro Max and the Pixel 4a, I don’t think I would switch, not to this specific phone at least.

The android is super light, plasticky, not waterproof, doesn’t have wireless charging, the battery isn’t as good, there’s no face ID which I would like to see if there’s one that has maybe both Face and Fingerprint? However, I do like the form factor. It’s tearing me away from the question of why do I need such a large phone? Mostly because when choosing a phone you only really get one chance. You get the one you pick, and then you’re stick with it for the rest of the year. Pick wrongly, and you’ll regret it for the rest of that year. I definitely think something of maybe this size, maybe slightly bigger would be a perfect fit for me in a day to day setting.

I think I might need to re-run this test somehow. If I can grab a flagship Android phone, maybe the new Samsung Galaxy S21 along with a watch and earbuds to see how that whole experience works. Errr, if anybody is watching this who wants to lend me an S21, a watch and earbuds – let me know?

Who Wins the Apple vs Android War?

To be honest, and truthful, I kinda think Android might win, for MOST people. But for me, there are still some challenges around messaging, which I hope apps like Beeper will resolve. I have been on the lookout for one app that can hold all of my messages from the likes of Facebook, Twitter, LinkedIn, WhatsApp, and any other app where people can message you. I just want one app to log into and use that ties into all of those places. I’ve yet to find one, but beeper does look like it stands a good chance of delivering, as long as the developer hasn’t been too overwhelmed with the record number of sign ups since he went public.

Thanks for reading, don’t forget of course to leave your comments below, subscribe to the channel for more if you haven’t already, hit the notification bell to be notified when new videos are posted, and I’ll see you soon. Next up, if I have my calendar right, I’m gonna be comparing the Base spec M1 Macbook air to the Top spec M1 Macbook Air.  See you soon, bye bye!