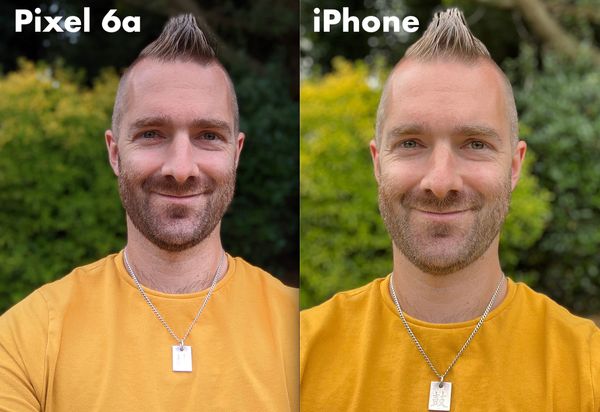 Genuinely shocked to see the results of this test between the Pixel 6a and the iPhone 13 Pro!

I was stunned with how this played out

I know, the iPhone 13 Pro is twice the price of the Pixel 6a, but just for giggles - let’s put them head to head in the categories that matter.

So let’s take these one by one, and by the end, we will all hopefully come to the same conclusion, that my £1200 iPhone 13 Pro is better than a cheap-ass, Google Pixel 6a.

Here are 2 photos using the front facing cameras… which one do you like the most??

The iPhone has done a better job at the colour of my shirt, I just hate what it’s done to my face. The skin looks too smooth, the skin colour looks off, my hair is a totally different colour, my beard even starts disappearing.

Whereas over on the Pixel 6a, it’s done a worse job at the colour of my shirt, but the face is much more realistic. Yes it’s perhaps a little over sharpened, but I would prefer to upload the Pixel photo than the iPhone photo here.

It’s the same story with the rear cameras.

The iPhone has those same skin smoothing effects and the Pixel 6a has the same over sharpened look.

I wish they’d sort that skin smoothing effect out because it just ruins lots of the iPhone photos.

Now of course the cameras will depend on each situation, there will be certain things that each one is better at - but there is a tonne of very clever processing going on by the Pixel which the iPhone tends to consistently get very wrong.

Generally speaking, The Pixel will be more saturated, and be sharper, whereas the iPhone will be less saturated and have Apples notorious skin beautification thing that I keep seeing completely ruining my iPhone photos lately.

So that’s photos - what about video?

A little difficult to explain in a blog post, but head over to my channel to see the full review to see the results here.

The iPhone tends to pick up more detail in the video than the Pixel in regular video mode, but it’s a very close comparison.

Switch over to slow motion though, and there is a clear winner.

Even though the iPhone lacks detail (because you can yet again see the horrible skin effect) the Pixel 6a looks horrendous!

All sorts of artefacts which shouldn’t be there.

So the Pixel 6a wins for Photos, and the iPhone wins for Video.

On the iPhone 13 Pro, I get a good day's worth of battery (and my battery health is at 99% still)

The Pixel actually does reasonably well. I got a solid 4-5 hours of screen on time, which is really impressive considering there’s the same Google Tensor chip in here that’s in the Pixel 6 and 6 Pro BUT, but it manages to stretch the whole day due to the lack of a 60hz display.

There’s no wireless charging on the Pixel 6a which is a shame - but given that this is a battery life test and not an overall power consumption test (where the iPhone does well still with a 120hz display) this one has got to go to the Pixel…. Damn!

OK, so over to the Messaging experience now.

And for messaging, I want to incorporate the use of the Assistant here too.

Because whilst iMessage is a huge selling feature of the iPhone, with all of the benefits that bring, (particularly in iOS 16 where you can un-send messages, drag and drop images which will automatically remove the background, send with fireworks and just a tonne of stuff), the Pixel also has a trick up its sleeve, and that is an actual, useful voice assistant that works.

I’ve given up asking Siri for anything more than what’s the time, or what’s the weather like today - short sentences like that it can handle just fine.

But try to dictate a message to a friend, and it’s frustrating. Both because you can never make it through a message without it making a mistake, and because for you to send it, you have to wait for the ‘Would you like to send it?’

This is where the Pixel has it right.

I love the Pixel Voice Assistant, you can use it to send full text messages, add emojis, and even send the message without having to wait a decade for it to repeat the whole message to you. It just works really, really well.

There’s also the Call Screen feature where the Google Assistant will answer phone calls for you and screen them for you, using voice recognition to show you on your screen what the caller is saying so you can decide to pick up the call or not.

Those features are awesome.

I use my Google Workspace account as my main account, and this seems to cause me a lot of problems with getting the Assistant to work properly on my Pixel devices.

I know that won’t affect most people who use the Pixel though, so it’s not fair to dock points for that - more just something I wish Google would fix, so hey, if you’re listening Google…

So what does that mean overall - well actually, I find myself using iMessage less and less, and instead I’m finding more conversations are moving to WhatsApp, or Facebook Messenger, or just anything but iMessage.

And so whilst iMessage does work incredibly well, considering most of my messages aren’t sent on iMessage anymore, actually the Google Pixel provides a better experience for writing out messages with their voice features that work.

With the Pixel 6a, I do find it’s a slower experience than the iPhone 13 Pro.

And whilst there are ways you can speed up things like the animation speed by going into the developer settings, you’re still restricted to that 60hz display, and something else that I should probably have mentioned in the camera comparison, but there’s something I experience on pretty much every Android phone that I ever use. And that’s shutter lag.

Shutter lag is the time that it takes from the moment you press the button to the moment it actually takes the photo. And on the Pixel 6a there is a definite shutter lag, when you directly compare this to the iPhone 13 Pro.

There’s also one elephant in the room which, unfortunately, is still there. And that is the under-screen fingerprint sensor is still the same as they had in the 6 and 6 Pro. Which can feel quite slow at times. And it’s nothing like using FaceID on the iPhone (I guess Apple has patented that to stop anybody else from copying them).

Even opening Apps on the iPhone is a night and day difference from the Pixel 6a, it’s not even a fair comparison.

As far as pure performance goes - the iPhone 13 Pro wins.

But you could buy one of every colour, have 3 times the battery life, or have 2 spares, 3 times the storage capacity - the Pixel isn’t a bad option. I’m just saying that boiling it down to performance, the iPhone wins here.

That word, that one word that defines all iPhone users.

The word that locks us in and prevents us from going elsewhere, and one of the biggest reasons it’s a struggle to move away from an iPhone.

When you mix an iPhone with an iPad, with a Mac computer, with AirPods - as long as you stay with the Apple ecosystem, everything does generally work beautifully.

Audio will move between headphones seamlessly as you move between devices, I can move my mouse between devices to control my iPad using my laptop's keyboard and mouse is just nuts. And things like Airdrop do make dropping files a hugely convenient and easy task to do.

This is an area where Apple is definitely leading the way right now, but I get the impression that Google isn’t far behind.

With Google and a Pixel device, you can still do a lot of those things. You can copy and paste between Chrome, you can even Airdrop from Android devices using other copycat services which will work cross-platform, and with the Pixel Watch coming soon, I’m really hoping to see something special from Google with that.

But for me with Apple, whilst it’s a significantly expensive ecosystem to be part of, it does work well.

And all in all, that means that our winner - is, actually, the Google Pixel 6a!

It’s got a great camera, it’s great for messaging, a great battery life, it’s just a shame it falls over in the Video with a few missing features like wireless charging and 120hz, and of course that best-in-class Apple ecosystem.

So Is the Pixel 6a Better than an iPhone?

Well, over the last 18 months of testing out tonnes of different android phones, I’ve come to just one conclusion.

But apparently, in this specific comparison, of these specific phones - apparently the Pixel 6a is the official champion.